Norman J. Warren is an interesting figure in British cinema. His genre films are all resolutely British, especially the enjoyable Satan's Slave, yet they are also clearly influenced by various other European luminaries (either deliberately or accidentally, as happened with Inseminoid, which feels like a British version of an Italian rip-off of Alien). Prey could almost be viewed as Bergman-esque, particularly as I have always viewed it as a sci-fi horror that also shows how not to treat unexpected houseguests, and Terror is a wonderfully bizarre riff on Suspiria. Bloody New Year is like a cross between The Shining and numerous Lucio Fulci movies. And that is no bad thing.

Everything starts with the leads having a run-in with some aggressive funfair workers. Making their escape, they jump in a small boat (!) and soon end up stranded on a small island. There is an abandoned hotel on the island, but that doesn't mean that it is really empty. Many spirits reside there, and they are about to terrify the teenagers who have unexpectedly joined them.

Seeing this nowadays, after knowing nothing more than the title for many years, I have to say that it amused and entertained me. If I'd seen it when it was first released, however, then I am not sure how I would have felt about it. It's a typically Warren-esque mix of the old-fashioned and the bizarre, with a  disappointing lack of gratuitous bloodshed and gore offset by a good selection of WTF? moments.

The script by Frazer Pearce is the silly skeleton upon which everything hangs. I mean, seriously, just re-read that synopsis above. It's like something from the Children's Film Foundation, except the characters are all supposed to be older teenagers (or in their early twenties, surely). That doesn't matter when you start to get the more standard horror movie moments though, especially when it is made clear early on that this isn't a movie concerned with logic or rationality. It's full of moments of madness, in the best ways, and viewers have to decide whether to go along with things or not. It's a lot more fun if you just go along with it.

The cast are a mixed bag, with everyone deserving credit for at least being game enough to throw themselves in amongst the daffiness of it all. Suzy Aitchison has the most fun, in my opinion, as Lesley, one of the first members of the group to be seriously transformed by the whole experience, Mark Powley feels like the closest thing to a lead, despite the focus not staying on any one individual for too long, and Nikki Brooks, Daniel James (credited as Colin Heywood), Catherine Roman, and Julian Ronnie make up the rest of the core group. Other main players include those nasty funfair workers (who . . . *slight spoiler* . . . do manage to make it to the island eventually) and the people portraying the various spirits, sometimes by simply standing there and wearing pale makeup.

A lesser film from Warren, this still has plenty to recommend it, as long as you are well prepared for what you are letting yourself in for. Sadly, the fact that it is being more broadly influenced, than some of his other works makes it a less interesting film than pretty much anything else from his horror output. But I'll still rewatch this before any number of slicker and "safer" movie choices. It's quite bad, and yet it has still managed to win me over.

This is THE way to own the works of Norman J. Warren (I cannot begin to cover the quality and quantity of the movies, and the supplementary materials). 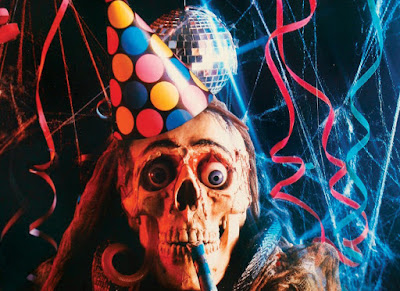