It's very much the norm now. After milking most of their properties with multiple sequels and spin-offs, and those constant "live-action" remakes, Disney have now figured out another way to sell product. They retell a story from a different angle, which mainly allows them to turn classic villains into strong anti-heroes. This approach didn't really work for me when they gave us Maleficent, mainly due to the fact that I felt the central character was reshaped too much to fit in with the new spin they wanted to give her, but it delivers a better result here, thanks mainly to the central cast and the fun spirit of the main set-pieces.

Starting with a sequence that shows a young girl named Estella (a wonderful turn from Tipper Seifert-Cleveland) being a bit troublesome for her mother, Catherine (Emily Beecham), viewers soon learn a few important details. When her troublesome side comes out, Estella refers to herself as Cruella. And one particularly lively escapade ends with her mother dying. We then move swiftly on to a montage that shows Estella meeting Jasper and Horace, living a life of opportunistic thievery, and then *voila* it's time to join the characters as young adults. Estella (now played by Emma Stone) wants nothing more than a chance to become a great fashion designer. Jasper (Joel Fry) and Horace (Paul Walter Hauser) may be able to help her achieve that dream, or they may just muck things up as they plan everything with an angle for an easy payday. Everything seems to be looking up, however, when Estella is noticed by The Baroness (Emma Thompson), and her eye for design gets her some rare praise. But some details soon come to light that make Estella realise she has been living a lie for some time, and the best person to set things right is . . . Cruella.

There's a lot to like in Cruella and, despite the overlong runtime (why must every major movie lately be over two hours long?), it's one that should keep many viewers happy. There's a fun, punk-lite, approach to the material that gives it an energy and vibe I cannot recall in any other Disney movie. It also manages to make the central character likeable without changing her completely, mainly because the events depicted here feel as if they take place quite some time before the events depicted in 101 Dalmations. As predictable as the plotting is, the actual character interactions and dialogue make things feel fresh and fun throughout.

That's also down to the cast. Stone is clearly having a ball for every minute that she's onscreen, and she gets to showcase a number of different looks and fashion styles (all of them pretty stunning and cool). Alongside everyone else onscreen, she pitches her performance perfectly, showing both the monstrous personality that will come to the fore in a few decades time and the twitchy girl quick to survey any situation to size up the potential loot and escape routes. Although more one note, Thompson is absolutely wonderful as The Baroness, a woman with a villainous manner who inadvertently helps Estella to put more of her faith in Cruella. Fry and Hauser are both fun as Jasper and Horace, although it's fair to say that both are also outshone by a small dog named Wink in any scenes that feature him. No slight on their performances, it's just that very few people could manage not to be outshone by Wink. John McCrea also gets to have a lot of fun, and costume changes, as Artie, a Bowie-esque young man who takes a liking to the style of both Estella and Cruella. As much as I love him, and I do, the only cast member who feels out of place is Mark Strong, maintaining his usual level of earnestness and gravitas in a film that wants to be a bright and funky cartoon.

Director Craig Gillespie was a good choice for directing this, based on his track record, but I'm less sure about the pairing of Dana Fox and Tony McNamara in the writing department. Fox has a number of so-so romantic comedies to her credit, but McNamara has the likes of The Favourite, "The Great", and the excellent (you should check it out) The Rage In Placid Lake to his credit, all of which seem more suited to writing a script about the formative years of Cruella de Vil. At least someone saw the working script for Birds Of Prey, but I'm not saying that's necessarily a bad thing.

What is a bad thing is the excessive use of music throughout. I'm not exaggerating when I say that the intrusive needle drops are on a par with Suicide Squad. The songs here may feel more relevant for every main scene, but I can only assume that music supervisor Susan Jacobs was told "get a song for every single scene . . . we'll decide the ones we don't need later". It spoils a lot of the movie, especially when you hear just enough of the score from Nicholas Britell to appreciate his work, and want more of it.

I personally liked most of the set-pieces, mainly a couple of heists and the big finale, but the aesthetic throughout works both for and against the material. What works one minute can grate the next, simply because of the unrelenting cacophony of music and camera moves. There's also the problem, inherent in most Disney movies, of knowing exactly how things will turn out. That's highlighted here with a sentence delivered in the opening scenes that you know cannot be taken as literal truth, which immediately undermines the ways in which the script tries to be a bit more clever and subversive.

You'll have a fun time watching Cruella, and almost any scene involving both Stone and Thompson is a pure delight. It's nothing great though. Maybe cinematic greatness is almost impossible when Disney keep raiding their own history, as opposed to creating some entirely new heroes/villains/anti-heroes to take us on pathways we haven't already walked over at some point. 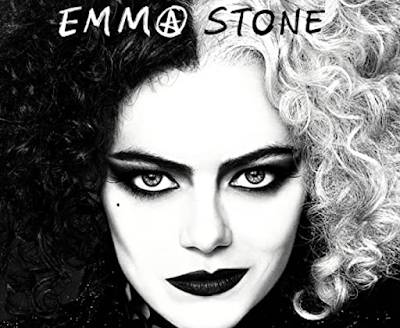