We're very lucky to have Yorgos Lanthimos. He's been making consistently great cinema for the past couple of decades now, and I recommend everything that he's done (although there are still one or two I have yet to see from his filmography, with the big omission being Alps).

The Favourite, from a script by Deborah Davis and Tony McNamara, is another jet-black comedy, not as deliberately strange as The Killing Of A Sacred Deer (in terms of both content and acting style) but still far enough removed from the norm to be a heady brew of laughs, nastiness, and occasional bemusement.

Olivia Colman is a frail and petulant Queen Anne, a woman who allows herself to be manipulated by her closest friend, Lady Sarah (Rachel Weisz). The relationship between the two women allows Lady Sarah to effectively rule over the country, by proxy, and that displeases some (especially Harley, played by Nicholas Hoult, a member of parliament trying to put an end to a war with France). Things start to change, however, with the arrival of Abigail (Emma Stone), a young woman who is a cousin of Lady Sarah, yet now seems a world removed from her due to a life of misfortune and hardship caused by her gambling father. Abigail sees an opportunity to get back all that she lost over the years, but she will need to ingratiate herself with the queen, push Lady Sarah out of her privileged position, and deal with the likes of Harley, a man happy to help or hinder anyone, depending on what they might be able to offer him.

Based on actual events, amazingly enough, The Favourite somehow works in every way that it can be viewed: comedy, political thriller, period drama. It works best as a mix of all three, obviously, but anyone who doesn't appreciate the other aspects of it should at least find one main strand they can appreciate. Lanthimos weaves it all together with an expert touch, allowing the more modern and unflinching presentation to play up the way in which all of the main characters are happy and quick enough to roll around in effluence, sometimes literally, as long as they know it's a way to eventually rise higher up than before. There are times when the more modern sensibility threatens to pull viewers out of the experience, but they aren't frequent enough to become a major issue.

The acting is equal to the material, with Colman already receiving plenty of deserved praise for her wonderful portrayal of Queen Anne. Weisz and Stone shouldn't be lightly dismissed though, and it's worth celebrating the fact that we get a film giving us three such fantastic portrayals of such enthralling female characters. Hoult has a lot of fun in his role, Joe Alwyn is fine as another gentleman who ends up involved in the scheming, and Mark Gatiss is fitting in his small role (almost a cameo, really).

Not for the prudish, The Favourite is a fascinating look at various people trying to influence one another in a variety of ways. It's about power, about reputation, about love, and it's about Lanthimos cutting further and further into the heart of things once again with the precision of a skilled surgeon.

You can buy The Lobster (still his best movie) here.
Americans can buy it here. 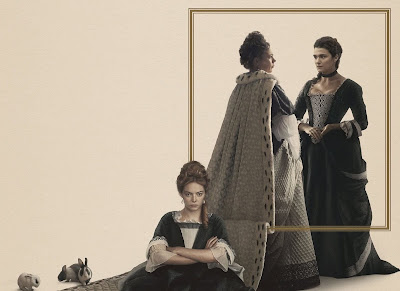