Following on from, as if you couldn't guess, Buck Privates, this Abbott & Costello vehicle sees our two leads trying to adjust to civilian life after their stint in the armed forces. This is made a bit trickier by their plan to keep and look after a young illegal immigrant named "Evie" (Beverly Simmons) and by the fact that they haven't really got any trade to fall back on besides their usual quick sales/con work.

Even more so than their other vehicles, Buck Privates Come Home has an air of comfortable familiarity about it. It's a sequel that spends the first few minutes introducing the lead characters with some footage from the earlier movie before going on to recreate the chemistry of that film. Bud and Lou are still the troublemakers with good intentions, Sgt. Collins (Nat Pendleton again) is still the authority figure trying to put a stop to their antics and there are a number of decent comedy moments that are stretched almost to breaking point. Okay, you could almost give that description to every Abbott & Costello movie ever made but the interaction between A & C and Pendleton here works as well as it did the first time around and it feels like a very smooth continuation despite the gap of over half a decade.

Director Charles Barton, working with the script by John Grant, Frederic I. Rinaldo and Robert Lees, does just fine with the material. Lou Costello may have regressed slightly with each movie, going from an innocent and all-too-trusting manchild to a dumb and incompetent  baby, but that fault (for those who view it as such) lies with the development of his comedy persona rather than the director having to shoehorn the personalities into a film. The leads all do their stuff, little Beverly Simmons is a bright young thing and Tom Brown and Joan Shawlee provide decent support.

It's a shame that there isn't more of the better A & C material in this movie but I must admit that the delivery of the standard slapstick and gentler comedy is very well done. It makes for a decent sequel to Buck Privates and an enjoyable vehicle for the comedy duo. 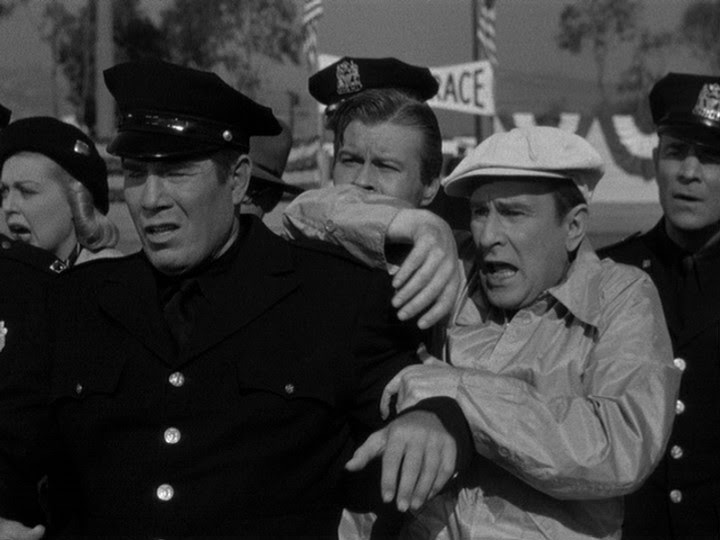