Anyone familiar with the wonderful comic creation of Garth Marenghi will get a lot of pleasure from this film, especially if you ever saw the TV show "Man To Man With Dean Learner" and laughed your ass off at the clip displayed of "War Of The Wasps", a fictional movie that Garth Marenghi was saddened to never have finished. Creepies IS "War Of The Wasps" but with big spiders instead of wasps. I'm absolutely serious.

Normal spiders can be creepy and horrible so making them big is often an easy way to get some good horror material. Hell, I even enjoyed the laughable Spiders and The Giant Spider Invasion. Creepies is like a combination of those two movies made on a budget of $50 with an assortment of old props the crew salvaged from the set of the Thunderbirds TV show. I remember many years ago when I used to sit up, playing Resident Evil on the PSOne with all of the lights out. Infected dogs jumping through a window made me jump out of my skin but I got REALLY scared when my onscreen character wandered into a room covered in webs. When a large tarantula burst in and I had to defeat it to continue with the game I was genuinely tense. That tarantula, way back in the 32-bit games console era, was scarier than anything seen in Creepies.

But only one of the titles already mentioned features this classic line of dialogue: "Yeah, well, before you pat yourself on the back I remind you that we got a spider the size of J-Lo's ass in Hollywood". Oh yes, Creepies starts off bad and gets worse in a way that leads to comedy greatness. This was the best bad movie that I've seen in some time.

I think many people misunderstand me sometimes. I KNOW how bad this film is, I know that many people would give up on it as a lost cause and I know that it doesn't deserve to sit alongside most of the other movies that it may share shelf space with one day. But I also know that it's bloody hilarious, I know that at least some of the humour is intentional (as long with some references to other movies - also pretty amusing, especially the Jaws moment) and I know that director Jeff Leroy and writer Eric Spudic tried to make up for their lack of budget with enthusiasm and affection. Which, for me, is something deserving a bit of goodwill, even if the movie gets almost everything wrong.

The acting stinks. I apologise is anyone involved reads this (though I seriously doubt that they will) but I think everyone was picked for . . . . . . . . . . . . their cost-effectiveness as opposed to actual acting talent. Though in the case of Ron Jeremy, in the movie for all of a few minutes, it's clear that he was only picked for being Ron Jeremy. Lisa Jay, Jeff Ryan, Phoebe Dollar, Calley Edmunds and everyone else onscreen plays second fiddle to the awful special effects mixing unconvincing rubber spiders with unconvincing special effects.

What more can I say? Do I mention the moment when a couple of people think they're safe from spiders because they've used a ladder to get higher in the building? Or the scene that features a spider communicating to the other spiders and giving orders to destroy humans? If you want some giggles then watch this and enjoy it as I did. If you want realism, however, you may as well opt for A Town Called Panic. 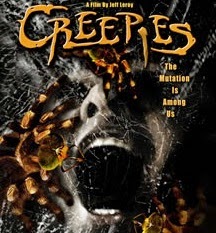