Knock back your egg nog, put on your Santa hat and buckle up for a sleigh ride that will see the blog devoted entirely to Christmas movies for the month of December. They may be obvious choices, they may only have one or two scenes allowing them to qualify but every film reviewed this month will have a connection to this tinsel-strewn holiday season. And anyone wondering why I've missed out a number of obvious choices . . . . . I probably covered them previously over at Flickfeast or even reviewed them on IMDb. Happy holidays.

When I heard about Arthur Christmas I was pretty darn pleased, I'll tell you that. I love Christmas movies. I love Aardman Animation. I love British stalwarts of cinema Jim Broadbent and Bill Nighy. This movie combined all of those things, with an added sprinkling of James McAvoy, Hugh Laurie, Imelda Staunton and Ashley Jensen, all people that I like a lot.

James McAvoy provides the voice of the titular Arthur, a sweet young lad who is as enthusiastic and happy about Christmas Day as he is prone to accidents. His father, Santa (Jim Broadbent), spends a very busy time getting all of the gifts delivered with the help of his many elves and Arthur's big brother, Steve (Hugh Laurie). It's a busy time for all, of course, but Steve has put a number of procedures in place to make things easier and to ensure that all goes smoothly. That's why it's quite a surprise to find that one child has been missed out, one present still needs to be delivered. Steve sees it as a minor blip in an otherwise perfectly executed Christmas and convinces Santa that they can deliver it a little bit later and still be proud of their work. Arthur, on the other hand, doesn't think that any child should miss out and worries that the poor little lass will think that Santa doesn't like her enough to deliver her gift. He thinks that the delivery should be made and he's encouraged by his grandfather (and the previous holder of the good Santa name, played by Bill Nighy). They may not have the gadgetry and precision planning that Steve has but they have a sleigh, some reindeer and an eager elf (Ashley Jensen) along for the ride.

As you would expect from an Aardman Animation film, this is a movie chock full of lovely visuals, great gags (they even recycle one of my favourite gags from the Wallace & Gromit adventures involving a toy train and some track being laid) and cute characters. The CGI sheen means that it doesn't quite feel as cute and loveable as some of their earlier output but that's just a minor quibble when everything is still crafted with so much care and attention to detail.

Barry Cook and Sarah Smith are the co-directors and Sarah Smith also co-wrote the screenplay with Peter Baynham which means that she gets to have the bonus points for steering everything so smoothly. The story is a very slim one, VERY slim, but it's enriched by the different character motivations and the amusing sideroads that are taken (sometimes literally).

It's also enriched by that great cast I mentioned up there in the opening paragraph. McAvoy is cheery and endearing as Arthur, Broadbent and Nighy are both very good as Santas a generation apart and Hugh Laurie is also enjoyable as someone who may seem bad but may also just be a bit misguided. Imelda Staunton is a fine vocal fit for Mrs. Santa and Ashley Jensen suits being an elf. Speaking of elves, other names such as Marc Wootton, Sanjeev Bhaskar, Robbie Coltrane, Joan Cusack, Jane Horrocks and Andy Serkis also lend their voices to a number of Santa's little helpers while Laura Linney provides the voice of the main computers used in the North Pole and on the delivery vehicles and Eva Longoria plays a government official who mistakes a flying sleigh for a potential threat.

You could say that it's just far too lightweight and sweet for its own good and you'd be perfectly entitled to your opinion but I expect sweetness from my Christmas movies and enjoy anything that doesn't overdo it all to the point of putting me into a diabetic coma. As for it being lightweight, it is. Yet it also manages to take the ever-so-slim premise and turn it into a feature that you will watch and enjoy without feeling as if it ever outstays its welcome.

To sum up then - another winner from Aardman Animation and definitely one to consider buying now and then leaving under the Christmas tree for the kids to unwrap on December 25th. 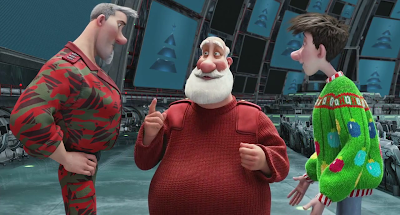