"Based on a true story" is a phrase that I, and many other horror fans, got used to dismissing a long time ago. Because it's not any sign of quality. It's not even any sign of authenticity. Many film-makers, sadly, end up using it as some kind of excuse to make up for anything that they want to put onscreen, be it ridiculous or crushingly dull.

In the case of Black Water it ends up being the latter. Three people take a boat ride into the mangrove swamp, which leads to them encountering a dangerous and hungry crocodile. There's Grace (Diana Glenn), her husband, Adam (Andy Rodoreda), and Grace's sister, Lee (Maeve Dermody). Grace is pregnant, which makes her survival here all the more important because you also have to think of the unborn child. And if you start to forget, don't worry, the film will remind you.

Written and directed by David Nerlich and Andrew Traucki, Black Water is a potentially interesting premise that doesn't do enough to keep it tense and entertaining for the runtime. The film-makers obviously think that "based on a true story" will make up for any other failings, which includes a weak script, poor selection of main characters (but you're not supposed to dislike them because they band together around a pregnant woman, in order to protect her and her unborn child), and a third act that weaves between the ridiculous and the surprisingly boring.

The thing to bear in mind is that anything that really happened can also be ridiculous or boring, so perhaps Nerlich and Traucki are sticking closely to the truth that they've based the story on. But that doesn't make the movie itself more satisfying.

Dermody is the best of the leads, giving you someone actually likeable and worth rooting for. Glenn is stuck with the thankless task of just trying to emotionally manipulate viewers by occasionally rubbing her belly, and Rodoreda is sidelined at times for moments that allow the sisters to be sisterly and have sisterly conversations. None of the conversations are particularly revealing or interesting, which means the time spent with the leads, when the crocodile isn't onscreen, isn't all that  enjoyable.

Don't worry though, because most of the crocodile footage is real. Very little CGI was used. So that should help you to appreciate the movie as it plods from one moment to the next. It doesn't. Of course it doesn't. It's just a gimmick, used in conjunction with the "based on a true story" line, that people again mistakenly throw out there as some kind of critic-proof value added to the film. I've seen a number of killer croc movies from the past couple of decades and I can safely say that Black Water is the worst of the lot. I am sure that some will enjoy it more than I did, and there are fleeting moments of decent tension when the croc remains underwater and you sense the characters being stalked, but it really didn't work for me. Part of that comes from the elements that feel cynically incorporated as pre-emptive defence moves, part of it stems from the end result just not being good enough.

Bonus points for how good the croc footage is though. 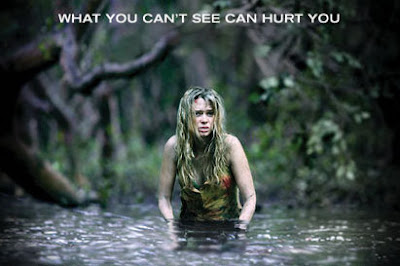