I'm not sure how everyone else encountered it, but The Wraith is a film I will always remember as a fond VHS favourite. The cooler poster design, the one that had the titular character standing beside his awesome car, the taglines, and the fairly impressive cast all made a strong impression on me, and the younger me had no idea that it was basically a reworking of one or two atmospheric Clint Eastwood movies.

There's a gang of assholes, led by Packard Walsh (Nick Cassavetes). Walsh wants to be with the beautiful Keri Johnson (Sherilyn Fenn), but she keeps resisting his advances, which is hard to believe when you see what a charmer Walsh is. The gang of assholes like to spend their time bullying people, racing cars, and generally being assholes, much to the chagrin of Sheriff Loomis (Randy Quaid). A new guy in town (Jake, played by Charlie Sheen) gets some attention, but not as much as "The Wraith", a black-clothed mysterious driver who turns up in a very impressive car, some kind of one-of-a-kind Dodge Interceptor. Without saying anything, this driver is challenged to race, which allows him to start picking off the gang, one at a time.

Written and directed by Mike Marvin knows exactly how to throw plenty at the wall for enough to stick. You get the attractive cast, the supernatural aspect of it all, the set-pieces (they might be limited by the budget and resources, but they're there), and the shiny, speedy car. Certain moments are very cheesy, not least of them being the moments of closure at the very end of the film, but if you accept it for all it is aiming for then you should still manage to have a good time. Perhaps Marvin could have learned further into the horror, and added some more gratuitous creepy moments in between the races and confrontations, but he generally does well at balancing the tone in a way that keeps focus on the teen appeal around the heart of the story. Having said that, I wouldn't be averse to a ramped-up remake.

Sheen is good enough as the handsome new guy in town, Fenn is as lovely as ever, and Cassavetes is a great alpha douchebag. The gang all under the leadership of Cassavetes is full of fun little turns, with special mention going to Clint Howard. Well, I suppose I mean to give special mention to Clint Howard's hair. Quaid is enjoyably chewing the scenery as the exasperated sheriff, and Matthew Barry is okay as a young man who doesn't realise that he has already known "The Wraith" in another guise.

The racing scenes are decently shot, the soundtrack has a couple of surprising hits in the mix, and the cast all at least have fun with their roles, even if they are not delivering the best possible performances. If you have fond memories of this from the VHS experience, as I did, then revisiting it won't leave you disappointed. It holds up surprisingly well, perhaps because it never tried to sell itself as anything more than an entertaining teen tale of ghostly vengeance. Which is all you get. 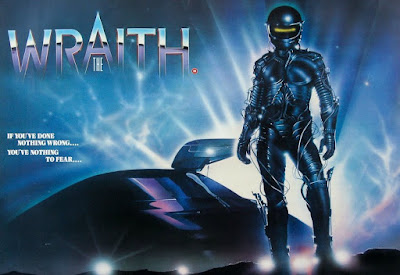