Jamie Foxx plays Joe, a music teacher who regrets the fact that he never managed to pursue his love of jazz fully enough to make it a career. He lives and breathes jazz, and when playing his heart out we get to see him go into the zone. But everything might change when he's given the chance to play for the legendary Dorothea Williams (Angela Bassett). Which is when he dies. And that really puts a spanner in the works. Working his way through the afterlife, the soul of Joe teams up with the soul of someone just named 22 (Tina Fey) for a plan that may benefit both of them. 22 doesn't really want to go down to Earth and start life, Joe wants to get back. If they swap places then everything might work out. But it's not going to be that simple, of course.

Despite the love I have seen heaped upon this film, and despite the fact that this is the first Pixar movie with an African American protagonist, Soul is yet another Pixar movie that is simply okay. They seem to have plateaued for a while now, with both this and Onward being technically wonderful animated movies that lack something in the plotting department. This is better than Onward, it has something at the heart of it that feels a bit less cynical and more worthwhile as a life lesson, but it just doesn't quite come together fully. There are times when this feels very Fantasia-like, times when it will remind you of Inside Out, and times when it is overshadowed by the live-action movies it was so obviously inspired by (It's A Wonderful Life being a key touchstone). It's a shame that there are very few times when it is just able to entertain and wow viewers while being itself. The fact that the best moments accompany the times when Joe is playing his beloved jazz music is telling.

Pete Docter and Kemp Powers do a good job with the directing duties, having also worked on the script with Mike Jones, and there's an obvious feeling that every scene has been crafted with great care and affection. It's no great return to form for Pixar though, largely due to the fact that the third act fumbles things when it could have done so much better. It was interesting to me that 22 was initially supposed to be the main character, and then they created and developed Joe as the guide to life on Earth, because that indecision is clear when you get to the resolution (or lack of resolution) for the two leads.

Foxx and Fey both do well in their roles, with the former hitting a particular sweet spot as someone who has spent a lot of his life ineffectively trying to control his enthusiasm for jazz music. It's strange to hear Graham Norton pop up, but his role is a good one, and his voice does suit it, but the cast is also filled out by the likes of Rachel House, Alice Braga, Richard Ayoade, and Phylicia Rashad. Although she may not say much, Bassett once again reigns supreme as the cool Dorothea, and she's a welcome addition to any film, even if it's just her voice.

Soul is a good film, and it's a real treat for Disney+ subscribers to have access to it immediately, without any extra charge to watch it. There are times when it is a very good film. I just wish we'd been able to go on more of a journey just with Joe. It's his story, he is a very likeable central character, and his viewpoint that shows all of the small pleasures in life that are too easily taken for granted, but there are too many times when it doesn't feel like it. That's the biggest mistake, big enough to stop this from being great, although it's still absolutely worth a watch. 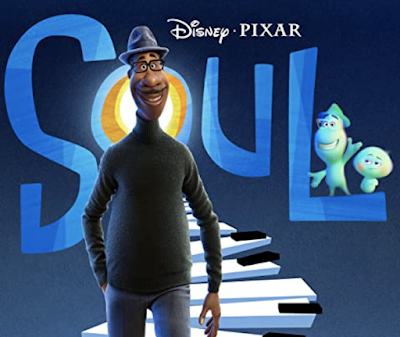