Sometimes reviews are here to help encourage others to seek out films that are relatively unknown. Sometimes I'm pretty much preaching to the converted. This review of The Last Boy Scout falls into the latter camp.

Bruce Willis is Joe Hallenbeck, a detective who is nothing more than a crumpled heap of neo-noir tropes. He gets dragged into a case that involves a stripper named Cory (Halle Berry) and her boyfriend, ex-quarterback Jimmy Dix (Damon Wayans). People start dying as they start to untangle a plot that involves gambling, corruption, and a ruthless businessman named Sheldon Marcone (Noble Willingham).

Starting with a hell of a set-piece that shows a football player tearing through a field of opponents and pulling a gun as he continues to run towards some points he desperately needs to placate some dangerous blackmailers, The Last Boy Scout is a small-scale film that works as well as it does thanks to the mix of characters and the impact of the many moments that have Hallenbeck cornered by deadly thugs.

Director Tony Scott brings his usual flair for this kind of material, without his usual love of excessively hyperactive editing (oh, you can tell it is HIS film, but it's much less headache-inducing than some of his later movie), and Shane Black is on form with his use of tropes and witty one-liners, making Hallenbeck one of his most memorable characters in a filmography that is just crammed with memorable characters.

Willis and Wayans are a good central pairing, with the former being older and cynical while the latter is a flawed wannabe-hero who perhaps isn't as familiar with how bad people can truly be. That's not to say that the character played by Willis isn't flawed, but his flaws are shown as part of the whole package that helps to make him so good at his job (or, at least, a stereotype who nobody expects to be able to achieve great things until he starts to defy the odds). Willingham is a charismatic villain, as is Taylor Negron (playing one of his right hand men), and Danielle Harris steals a couple of scenes, playing Hallenbeck's moody, but also smart and brave, daughter. Berry doesn't do too bad in her role, Chelsea Field is Hallenbeck's suffering wife, and there are one or two scenes for the great Bruce McGill.

You can predict a lot of the main plot beats here, and Black has never been bothered about being predictable, his focus is always on the dialogue and pacing, but this is yet another film that gives you joy through the actual journey, rather than the main destination. Which isn't to say that the finale is a disappointment. It brings everything together beautifully, and keeps the stakes high for all involved.

Willis gives one of his best, grizzled, turns (this performance sits just below the better Die Hard movies and Twelve Monkeys, in my opinion, if only for the pure fun of it), Wayans is on good form, there's a great score from Michael Kamen, and Scott and Black make a great team. It's a shame that this was their only film together. It's a high point for both of them. 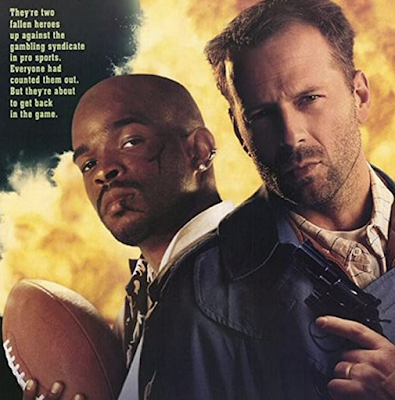