Here we are, at last. This is the final (to date) film in the killer croc movie series, and I have to say that my expectations were very low as I went into it. Anyone else would feel the same after slogging through the previous instalments, which crashed so low after the fun of the first film. And yet, despite the odds, I also held on to a small bit of hope.

Directed by Darrell Roodt, who has a few movies in his filmography that make it worthy of exploration, this presents a script from Jonathan Walker that puts a bunch of urban explorers in peril. It may not be the most complex premise, but it still feels as if more effort has been made here than was made in so many of the other sequels (that really all just had numerous people accidentally wandering into a lake full of happy snappers).

The cast are decent enough, and I was happy to see Joe Pantoliano as the one established actor given a supporting role this time (and giving a performance a lot more restrained than anything we saw from Yancy Butler or Robert Englund in previous movies). Katherine Barrell, Tim Rozon, Sai Bennett, Luke Newton, Craig Stein, and others who will be devastated that I haven’t namechecked them here, all at least try to act well enough to overcome their lack of character development. As a group of relative unknowns (relatively unknown to me anyway), there is some extra fun to be had from knowing that anyone could be chomped at any moment. Well . . . until it starts to become obvious who has been given the lead/survivor role.

Although clearly not a movie with a huge budget, the FX work here is something else that feels like a step up from most of the preceding films. Those involved either had some more money to play with or decent CGI has become easier and cheaper to get right, and it’s a relief to see a killer crocodile that doesn’t look as if it crawled out of an early Resident Evil game. It’s not a perfect creation, but it’s good enough.

The main setting is used well, dressed and lit in a cost-effective way, and the pacing just manages to keep boredom at bay. I could recommend you at least 20 crocodile/alligator movies better than this one, and most of those could be off the top of my head right now, but I could also name a fair few films that were a lot worse than this (although most of them, sadly, have Lake Placid in the title).

Not one to mark as a high priority, but those working through the series will be relieved to find that it ends on a relative high note. Until they decide to remake/reboot/make another unnecessary sequel. 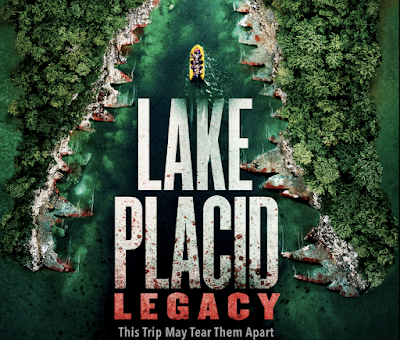