The feature movie directorial debut from writer-director Craig Strachan, who hasn't done anything else since this (thankfully), Wild Country is a film that starts off well enough, presenting a very familiar premise with a decent young cast onscreen, before falling apart quicker than the flimsiest house of cards.

Samantha Shields is Kelly Ann, a young woman we first see giving birth to a baby. That baby is then given to someone else, a decision made based on the fact that Kelly Ann is deemed too young and ill-equipped to be a mother. Some weeks later, Kelly Ann and a few other teenagers are driven up to the Highlands by Father Steve (Peter Capaldi), where they are supposed to hike their way to a designated meeting point. Kelly Ann's ex-boyfriend, Lee (Martin Compston), turns up, making things a little bit tense. And then some creature starts menacing them.

The tension within the main group, the idea of these teens being left all alone in the middle of nowhere, and even the plot detail of finding a baby (because, yes, Kelly Ann finds a baby, which means she spends a lot of the movie protecting it), these are all decent elements to mix together for what could be a potentially enjoyable, low-budget, horror movie. Adding a strange creature isn't a terrible idea either, in theory. Where Strachan goes spectacularly wrong is in the execution of the material, particularly in scenes that show off a creature that never once looks as scary as it could be. It's a shame that nobody advised Strachan to turn his limitations to his advantage, because some better sound design and just an occasional glimpse here and there would have been a much better way to show the presence of something that endangers the main characters.

Strachan doesn't help himself with the script either, reducing the serious side of the film to little more than a few soap opera moments before making viewers watch a bunch of people it's very hard to care for fight for their survival. And when I say fight for their survival, I mean . . . run around in a dark field and shout at one another. And the strangely comedic diversion showing Father Steve having a surprise tryst with a Highland innkeeper may not crop up too often, but it belongs in another movie entirely.

Sadly, I can't even praise the cast. Shields tries hard, and I think she does well with what she's given, but it's not enough to improve the movie. The same can be said of Compston, an actor who I rate very highly. Capaldi is welcome, simply because he's Capaldi, but mis-used, and Jamie Quinn is at least one extra familiar face (playing one of two brothers, the other one being played by his real brother, Kevin Quinn), especially to fans of Still Game.

Despite everything, I quite liked the ending of this, but it was once again something that worked better in theory than the execution (which is, sorry to say, a bit laughable). I think others may be even less charitable, and this isn't something to recommend to anyone, because the rest of the film is a mess of murky night-time action, characters wandering around while they fear their impending doom, and creature design so woefully inept that it would have been better to just thrown a bathmat over a dog. 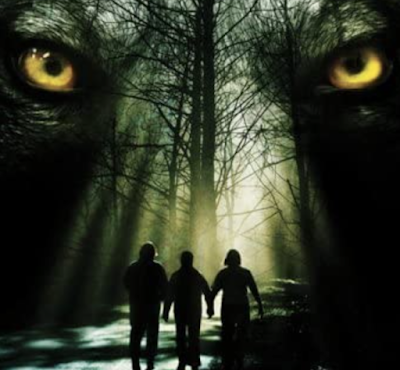