Once you get beyond the opening act of Miss Congeniality, with numerous scenes built around the fact that Sandra Bullock isn't viewed as a lady because she's strong, smart, doesn't take time to ensure her hair and make-up are flawless every morning, and is generally just "one of the guys", things improve considerably. Instead of just trying to hide Bullock in the wrinkled clothing of "FBI slob", she gets a chance to shine, in terms of her transformed appearance and also, more importantly, in scenes that show her talent for comedy.

The basic plot is nonsense, but nonsense that makes the whole thing easy enough to buy into. Bullock is Gracie Hart, the only agent available at short notice to help infiltrate the Miss United States beauty pageant, which the FBI believes has been targeted by a dangerous criminal who wishes to blow it up. Gracie only has a couple of days to be groomed by Victor Melling (Michael Caine), who initially suspects it's a job that even a man of his skills cannot manage, and she is a pain in the backside of all those involved, be it the hosts (played by Candice Bergen and William Shatner) or her colleagues at the bureau (Benjamin Bratt tries to offer support, Ernie Hudson is the boss none too impressed by the whole escapade).

Director Donald Petrie has a filmography with some solid comedies in there, but few real greats. This is another solid one, almost lifted higher by the performances from a couple of the main players. Although it's all put together competently enough, it suffers from a script that fails to wring as many laughs from each sequence as it could. Marc Lawrence has written a few features that Bullock has starred in, whether by coincidence or by design, but co-writers Katie Ford and Caryn Lucas are names I am less familiar with, and that makes me wonder if there were a number of conflicting voices here that tried to pull the film in too many different directions, tonally, without keeping the comedy at the front and centre of their plans. You have the thriller plotline, often sidelined aside from one or two key sequences, you have the "fish out of water" aspect of Bullock being somewhere she really doesn't want to be, and you get the moments of female bonding. None of these elements spoil the experience, but the shifts in tone are enough to make it feel inconsistent and lacking in cohesion.

The consistency comes from the main performances. Bullock is a lot of fun, making the most of this star vehicle, and Caine works very well alongside her, helped by the fact that he grabs most of the best lines from the script. Bergen and Shatner are both good, with the latter a perfect fit for the role of slick show host, and Heather Burns is very sweet as "Miss Rhode Island", a girl who brings out the protective nature of Bullock's character. Other contestants are played by Melissa De Sousa, Deirdre Quinn, and Wendy Raquel Robinson, although they often have to resign themselves to being scene-setting accessories in most of their scenes. Hudson gets to be angry in a couple of scenes, and that's his whole character (basically), and Bratt gets the thankless role of potential romantic interest, which makes a nice change from a talented actress being stuck in such a role.

There's a good selection of familiar hits in the soundtrack, some amusing lines of dialogue outwith the exchanges between Bullock and Caine (my favourite being the answer to a question about a favourite date), and it just about manages not to outstay its welcome. If you're a massive fan of Bullock then you may want to add an extra point. Everyone else can have more laughs with Drop Dead Gorgeous (a much funnier film with a similar setting, albeit very different thanks to the mock-doc style) first, and then get to this one whenever the opportunity arises.

You can buy the movie, with the sequel, here.
Americans can buy it here. 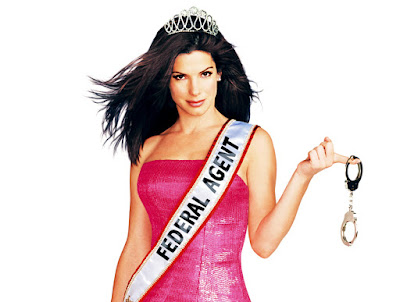