What is the point in even attempting to write a review of Psycho nowadays? People have said everything there is to be said about it, right? It's had a remake that was almost shot for shot, it has featured in movies made about director Alfred Hitchcock, and that classic shower scene has even been dissected in a documentary all on its own (78/52, which refers to the number of shots and cuts, respectively).

And yet . . . it's that feeling that everyone has seen the film, that everything to be said about it HAS been said, that makes me feel it is still worth writing a whole review. Because most of us know Psycho, and know it well, but I would wager that few remember just how great a number of the elements are, especially when you are asked to pick favourites from the outstanding filmography of Hitchcock.

It seems pointless to summarise the plot, and pointless to try and avoid spoilers. So let me roll my sleeves up and attempt to do two pointless things at once. Janet Leigh is Marion Crane, a woman we first see making herself look respectable again after a tryst with her lover (John Gavin) in a hotel room. They are not married, he stays quite a distance away and has very little money, but they do seem to love one another. The whole situation, and an encounter with a customer at her work who seems intent on being as vulgar about his wealth as possible, leads Marion to seize an opportunity when her boss asks her to take a large sum of money to the bank. She leaves town, money in her possession, and sets out to join her lover. It's a long journey, however, and she decides to stop at the isolated Bates Motel, which seems suited to the low profile she is keeping on her travels. And the young man in charge of the place (Norman, played by Anthony Perkins) is very pleasant and accommodating. He seems to take a liking to Marion, but his mother most certainly doesn't.

Everybody remembers bits of Psycho. They remember the shower scene (it's unforgettable, a masterclass in editing and audio-visual synchronicity), they remember the Bernard Herrmann score, they remember the twists and jumps. They even remember how good Perkins is in his main role. They also often remember enjoying Martin Balsam (he plays a detective who ends up trying to track down Marion Crane). Some people also remember that Janet Leigh is quite good in her role, despite being overshadowed by Perkins.

Yet very few people remember everything all together. I rewatched Psycho with the intention of taking down some notes in preparation for this review, and I soon gave up on that idea. I was hooked from the beginning, and I knew there was better still to come. Leigh isn't just quite good. She's great in her role, perfectly portraying a woman who has one moment of madness and then spends the rest of her time onscreen weighed down by that decision. Perkins still manages to overshadow her, but not deliberately, simply due to him being so absolutely perfect as the nervy and pleasant young man with a dark secret. Balsam comes into the movie at just the right time, a shot of energy before the tension starts to ratchet up again in the finale, and Gavin does a good job in his smaller role, working well alongside Vera Miles (playing the sister to the character played by Leigh).

Hitchcock knows just how far to push things, and how to code the characters very effectively, in ways that work with, and subvert, expectations. There are other films from him that are more complex, that are more thematically interesting, that can be dissected even more than this one, but Psycho is arguably his most effective blend of the macabre and the entertaining. He's helped by the team around him. Hermann giving him that classic score, Joseph Stefano giving him a cracking script adapted from Robert Bloch's source novel, the supporting cast members, the titles from Saul Bass, and every key player who helped to bring his vision to life.

And what more is there to say? Nothing, and everything. There are new film fans created every day, of all ages, and some won't have seen Psycho yet. So I hope this may prompt one of them to do so. I also hope it maybe reminds more seasoned film fans to revisit it, to just remind themselves of how utterly fantastic it is, in every aspect of the craft it took to bring it all together. That is the point in deciding to write a review of the movie, after almost sixty years of it scarring the membrane of public consciousness and becoming a pop culture staple. Or maybe it was just another little moment of madness.

"We all go a little mad sometimes. Haven't you?"

This is the set to buy. And, ummmm, please click on links somewhere on this blog and help because I MAY have just ordered that set for myself. Seriously . . . help. 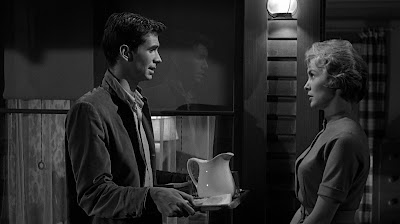