Despite my fear of them (fear, revulsion, general feeling of starting to itch, depending on what species is onscreen), I do occasionally like a horror movie that features some killer insects. Infestation is a comedy horror, but it's one of many that fails to make the comedy funny enough or the horror content actually scary, or thrilling or bloody enough.

Chris Marquette plays Cooper, a young man who we first see heading in to his work, late as usual. He doesn't seem to have any motivation, which disappoints his father (Ray Wise) no end, and thinks a fun way to waste some time is to call someone's name and then immediately look as if he is busy with something else. That game COULD be fun, I suppose, if it looked as if there was more than one person playing. There isn't, not really, and so all we have is a pointless set-up for a payoff much later on, which is actually almost worth it. Anyway, a load of bugs grab everyone, wrapping them up to come back and harvest later, which leads to Cooper fighting for survival with a group of disposable supporting players.

Written and directed by Kyle Rankin (who would go on to direct the more enjoyable Night Of The Living Deb a number of years after this, as well as a few other movies I've yet to check out), Infestation has far too many problems to make it as much fun as it wants to be.

First of all, the characters aren't easy to root for, especially our slacker lead. I know someone like Cooper is supposed to be identifiable as he struggles to find his way in life while making his little efforts to "stick it to the man", but when you take things too far then you end up stuck with someone you want to get away from. I usually quite like Chris Marquette, having seen him in a number of enjoyable teen movies, but I spent the entirety of this movie just reminding myself that he's usually more than just a low-budget Miles Teller.

The same can be said for the rest of the cast. Well, not the exact same, but you know what I mean. Brooke Nevin, Kinsey Packard, E. Quincy Sloan, Wesley Thompson, and co. don't get a chance to shine. The only one who comes out of this well is Ray Wise, and that's simply due to the fact that he's giving one of his familiar performances that allows him to go full Ray Wise.

Second, the script is a mess. While focusing on his smart-ass lead, Rankin forgets to keep things engaging enough in between set-pieces, fails to flesh out any of the supporting characters enough for viewers to care about them, and seems to revel in the fact that most of the people onscreen live or die thanks to no more than good or bad luck.

Of course, the second point also explains the first. I could have just said that the script undermines the whole endeavour, but I wanted to highlight the different ways it manages to damage the material. Distract from this with better comedy or gooey FX moments and it's easier to overlook, but this doesn't do that.

You do get some decent CGI throughout, considering the obvious budgetary limitations, and the lack of any full explanations for the wilder ideas ends up working in the film's favour, but this should have been an easily-enjoyable bit of fun, instead of a bit of a slog that outstays its welcome by about 15 minutes.

You can buy a disc here.
Americans can buy that same disc here. 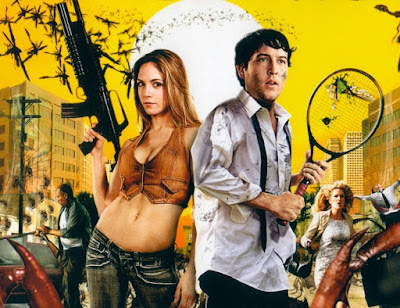