Well, I guess I owe an apology to quite a few people. I used to spend some of my time online defending this ill-advised remake of the Hitchcock classic. This recent revisit, the first time I have watched the film since I caught it on a rental VHS copy, quickly had me reconsidering my view. So many elements are awful. And yet... yet... there is still something here that leaves it ad a fascinating experiment. Not a satisfying movie, and not a remake that comes anywhere close to the original, but something worth viewing as a way to strengthen the case of how many different elements come together to make a movie a timeless classic.

You know the story, basically. Unless you don't. If you don't, I am not going to spoil any potential twists and turns, even if you've seen the original film. Anne Heche is Marion Crane this time around, a woman who is left in charge of a large sum of money by her boss and, in a moment of madness, heads off to use the money as a chance to start a better life with her boyfriend (Viggo Mortensen). Tired from the drive, but so close to her destination, Marion pulls in to get a room for the night at the Bates Motel, where she meets Norman (Vince Vaughn). He seems like a nice young man, in stark contrast to his angry mother.

Based on the exact same shooting script as the 1960 original, written by Joseph Stefano, and with many shots replicated as closely as possible to the way Hitchcock already did them, it's understandable that many people cite this as an example of a remake that is completely pointless. I was tempted to think the same thing as the end credits rolled this time around.

And yet . . . there's definitely a lot to be gained from viewing this as an academic exercise. Director Gus Van Sant knows how pointless it is to try and remake such an acclaimed masterpiece, and he makes a great effort to highlight the futility of the exercise. Before you even see one bit of the performances on display, just watching the opening credits is enough to put you off. They're exactly the same as the original credits. They're just now in colour. Seconds into the film and it's already not as good, the colour seems to serve as a final flag raised up before the viewer. "You were warned," it seems to say, "and now the reality of the situation is here in front of your eyes." This continues throughout the entire movie. Even the moments that are staged as best as they can be (the sequence between Marion Crane and a highway patrolman, this time played by James Remar) just don't ever feel as good because, well, they're just not.

It's a shame that the cast don't do better though, even if they were given a thankless task. Heche is hard to warm to in the role of Marion, and Mortensen gives one of his worst performances as her beau. Vaughn is given the biggest shoes to fill, and I still find a lot to admire in his performance. It doesn't work, his laugh is too jarring and his quick-talking manner feels unlike the Norman Bates we're used to, but I still appreciate the way that he tries to make himself seem smaller and a bit more timid than he seems in most of his other roles. Julianne Moore, as much as I like her, is quite awful as Marion's sister, not helped by the pointless addition of headphones she is given to wear (as if the character was written to be some spirited, resourceful teen), but William H. Macy at least manages to make up for her presence in the second half of the film, easily outshining both her and Mortensen in his scenes as the detective, Arbogast.

And yet . . . there's STILL something here. Something in the heart of the story, something that pulls you towards it, even as the performances and the new colour scheme put you off. Van Sant knows this, he knows that YOU know it, and your growing appreciation for the original movie in direct correlation to your anger at the audacity of this remake just goes to prove the point that he decided to make when he took on this project.

You can buy the movie here, if you really want to.
Americans can buy it here. 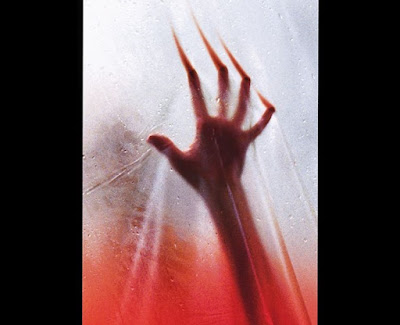