A fairytale framed by dramatic elements, and punctuated by moments of vicious violence, Pan's Labyrinth remains the very best thing from writer-director Guillermo del Toro, despite stiff competition from the likes of Cronos, The Devil's Backbone, and The Shape Of Water.

The main character is a young girl named Ofelia (played by Ivana Baquero), who is taken along by her mother (Ariadna Gil) as they start a new life with the ruthless Captain Vidal (Sergi López). Vidal is under orders to deal with republican rebels in the local area, a job he does with no small amount of rigour and zeal, even fatally punishing people who were guilty of nothing more than hunting rabbits in the wrong area. Ofelia does not like her new stepfather, but she does like Mercedes (Maribel Verdú), a housekeeper who is helping the rebels in their efforts. She also takes a liking to escaping into some flights of fantasy, encountering a Faun (Doug Jones) that sets her a number of challenges, explaining that completing them will prove that she is the spirit of an immortal princess from the underworld.

Intelligent, tense, and beautiful throughout, Pan's Labyrinth is a moving and rewarding experience for horror movie fans. I was worried about revisiting it this time around, having not seen it for about a decade, and I could remember the basic plot elements but not exactly how they all played out, but it took me mere moments to settle into the rich and detailed onscreen world, onside with young Ofelia from her first moments.  I encourage anyone else to revisit this, especially if you have left it as long as I did.

As a cinematic world-builder, I cannot think of anyone who does that better than Del Toro, especially when it comes to his horror work. He's helped in no small measure here by Jones, who plays both the Faun and a character named the Pale Man, and some gorgeous CGI creations (insects and fairy figures), but there's not one element I can think of that feels like anything less than top-notch work.

Baquero gives a wonderful performance in the central role, at ease with the magical sights around her as she retreats further and further away from a reality that is growing bleaker and bleaker. Both Gil and Verdú work well with her, and on their own. The former is playing a character who, due to her heavily pregnant state, spends a lot of her time resting and unable to see the worst of the events unfolding around her, either unintentionally or deliberately seeming oblivious to things. The latter is a strong fighter who has to work even harder in the third act to help save the lives of those she cares for. López portrays one of the great villains of modern cinema, whether he's horrifically bashing in someone's head with a wine bottle, torturing prisoners, or trying to self-repair his own wounds. He's easy to hate, and viewers are clued into how we should feel about him from Ofelia's point of view, but also avoids being a pantomime figure. You could argue that Del Toro sometimes has more time for his villains than his heroes, but he gets the balance right here, and every character, even a local doctor (played by Álex Angulo) becomes someone you're invested in. I've already mentioned Jones. I don't want to harp on and on about him, but his performances are absolutely worth mentioning again, and he has the pleasure of being involved in the most memorable imagery tied to the film.

The script and direction are almost perfect. The only criticism, a very minor one, is that you can too easily tell one or two characters that may be dealing with Captain Vidal while also betraying him by helping the rebels. A couple of nervous movements and glances feel very obvious and unsubtle, especially compared to everything else in the film. But that is the only thing I can think of that stops this from being a perfect modern classic of cinema, and it's still not enough to actually stop it from feeling, overall, like a flawless gem.

For teenagers who have the patience, and for all adult viewers, this is a powerful enchantment. Del Toro himself is the insect/fairy who takes our hand and takes us slowly and surely into an underworld as beautiful as it is dark, reassuring us at every step that we have nothing to fear, as long as we remember everything he is telling us. It's a tale of familial love, a tale of grief, a tale of war, and a tale of tales, how we use them to process horrifying thoughts and to escape reality, even if that escape is only temporary. Even if it is our mind deceiving us while our body endures some harsh mistreatment.

You can buy the movie here.
Americans can get a great disc here. 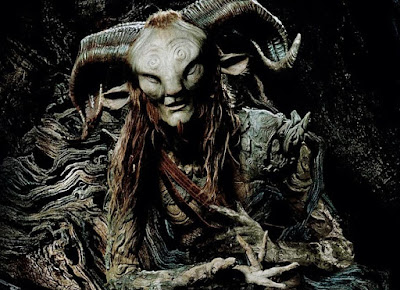