First of all, a quick note to any more observant readers of my ongoing Seagal quest. Due to a bit of a chronological cock-up (to use the technical term) I ended up seeing this movie by mistake and WILL be playing catch up over the next few weeks with the films I should have already seen before viewing this one. With that out of the way, let's get on with the review.

You may be surprised to know that this Steven Seagal movie sees our main man as an ex-special ops intelligence superspy ninja type of guy. You may be even more surprised to learn that he has a young daughter who is whisked away and put in some danger, giving Seagal a personal reason to slap lots of people around. Everything is connected to some formula for a new biological weapon that Seagal is, unwittingly, in possession. Okay, so if you've seen other Seagal movies then none of this will surprise you.

At this stage in his career, you'll also already suspect that the movie contains the following: bad acting, low production values, a number of limp action sequences and plenty of nonsense that serves to show off Seagal as the cross between Buddha and MacGyver he clearly thinks he is.

The genuine surprise comes from the cast. Imelda Staunton tries on an American accent and hopefully never lets anyone else in on the fact that she starred in a Seagal movie. Eva Pope and Alex Ferns represent, respectively, Coronation Street and Eastenders. Surely, any number of decent TV projects would have been a better choice for these ex-soap stars but they decide, instead, to embarrass themselves for the sake of action movie glory (please read that sentence with as sarcastic a tone as possible).

Michael Keusch directs and shows why his name is still relatively unknown for someone who has worked on over 50 different projects. I'm sure that he managed to keep Seagal happy but he doesn't please anyone else, though undemanding fans who have damaged their minds already with the worst from their hero may find this at least tolerable.

The story is, unsurprisingly, from Seagal (co-written by Steve Collins and Joe Halpin) and that explains most of the failings. There's nobody else worth bothering about in a movie that doesn't even provide a hero worthy of rooting for. But, to damn the film with faint praise, it's still a notch or two above the worst that the Steven Seagal has appeared in. 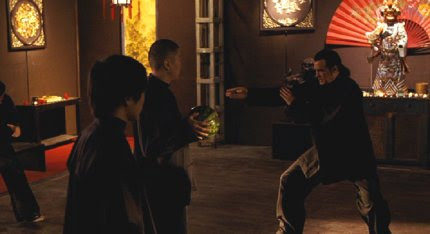