Before he settled into a disheartening routine of recycling his own material, playing around with celebrity chums and judging various meals, Michael Winner was a director with no small amount of wit and talent. Yes, I said it. It's largely forgotten nowadays but look back through his filmography and there are still a number of his movies that are worth seeking out. The Jokers is one of them.

The relatively slim plot sees Michael Crawford and Oliver Reed playing two brothers who enjoy nothing more than a good prank or two, the more audacious the better. Between them, they hatch the ultimate caper: they're going to steal the Crown Jewels. As long as they make it clear that they never intended to keep them for personal gain then they should be able to get away with the whole thing. Well, that's the plan.

It's a movie from the late 60s set in London so you shouldn't be surprised to find more than one or two scenes that focus on the groovy side of life and just how cool everyone is, whether they're dancing in a disinterested fashion or watching a piece of performance art (performed and viewed, it has to be said, in a slightly disinterested fashion). Because being disinterested = being cool. You dig? The characters played by Crawford and Reed are the coolest of the cool because they aren't actually interested in anything around them that doesn't serve to amuse them or be manipulated in their numerous schemes. And while I may seem to be sarcastic here, I assure you that it's only slight sarcasm. Swinging 60s London is a scene that can provide a lot of unintentional giggles but, dammit, it does still seem very cool. And Crawford and Reed ARE cool in this film, the former really embodying the kind of laid-back, carefree cad audiences should actually hate (but don't) and the latter being simply Oliver bloody Reed in, arguably, the prime of his life.

The script is written by two other names familiar to fans of UK TV - Dick Clement and Ian La Frenais, a writing team responsible for classic shows such as "The Likely Lads" and the absolutely superb "Porridge". The story idea may have been hatched by director Winner but the two men make sure that things zip along nicely in between the key moments and that every line is in character, and usually pretty funny when juxtaposed alongside the attitudes of the characters onscreen.

Michael Winner deserves some praise. Sometimes. The Jokers may not be an absolutely unmissable classic but it holds up well. Much like The Thomas Crown Affair, it's a heist movie that takes more delight in enjoying the boredom of the bourgeoisie and how those afflicted may try to cure themselves. A fun film worth checking out. 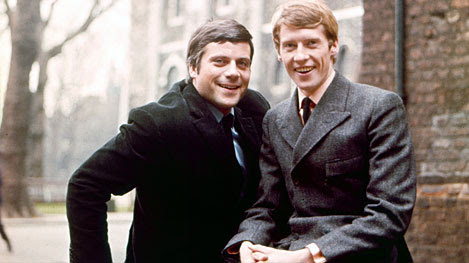