Michael J. Fox stars in this enjoyable 1980s comedy that shows a highschooler discovering that the hairs on his palms aren't just from that hobby he's not supposed to have. Nope. He's a werewolf. Which is going to make life at high school either a LOT tougher or a LOT easier.

Despite many other actors taking on similiar roles, it's hard to argue against the fact that Michael J. Fox was the everyday teenager to a generation who grew up with him throughout the 80s. In real life, he was already a bit older and wiser than the teenagers he so often portrayed but onscreen he was Alex P. Keaton, Marty McFly and, in this movie, Scott Howard. And the big plus for Teen Wolf is that it has a great central concept but also fills the movie with the standard scenes of a teenager going through . . . . . . . . . . changes. So the whole thing is a fine analogy for puberty, the various rites of passage that teenage years bring and trying to fit in at high school? Not to oversell the thing but, well, yes. Kind of. Of course, when I first saw the movie at the age of 9 or 10 the movie was about a teenage werewolf and "surfing" on the roof of a van. So it has something for everyone.

Director Rod Daniel keeps things nice and simple. It's a teen movie, it comes in at just under the 90 minute mark and it has Michael J. Fox. All is good. Add in a great supporting cast (James Hampton as Harold Howard, the lovely Susan Ursitti as the lovely 'Boof', Jerry Levine having a blast as 'Stiles', Lorie Griffin as the shallow Pamela Wells, Mark Holton as 'Chubby', Jay Tarses grabbing most of the best lines as the coach and Jim McKrell as Rusty Thorne), some decent practical effects and the main achievement that the characters are striving for - to win a basketball championship - and you have a movie that remains as easily entertaining today as it was over 25 years ago.

Jeph Loeb, Tim Hayes and Matthew Weisman put together a decent script and a number of scenes are accompanied by decent, inoffensive tunes in line with the sound of the decade (admittedly, the special dance moment is quite cringeworthy). There are many other teen movies with sharper dialogue but it's easy to forget just how many great lines and little moments this film has.

Give it a visit some time, you may just be surprised to find that you enjoy it. 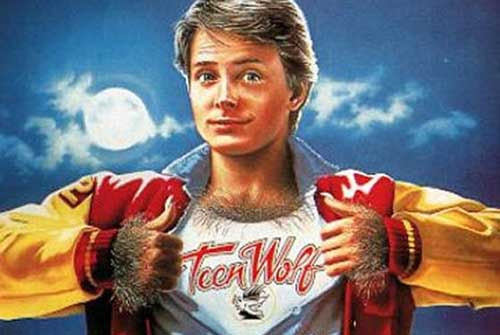 NB - it's worth noting, for anyone who may not have heard the news yet, that Teen Wolf has been "reimagined" for an ongoing TV show that launched in the USA in 2011.
Posted by Tylerandjack at 14:41