There's a popular term used when people try to repeat some success that they've had or simply rehash their previous work. It's the one about going to the well one too many times. Well, let me tell you, in the case of Steven Seagal he's not only gone to the well too many times but he's also drained every drop of moisture from the air around him, creating an atmospher as dry and harsh and uncomfortable as any major desert area.

This time around, Seagal is John Sands, some ex-soldier type who is called in to help when a new aircraft is stolen and put into the hands of the enemy. It's a bit like Broken Arrow meets Stealth only, according to everyone, it's actually just a blatant remake of Black Thunder (a 1998 movie starring Michael Dudikoff that I've not yet seen). Oh well, you might say, at least they can blame someone else for the lame plot and poor script this time around. Nope, Steven Seagal and Joe Halpin take the writing credit. Perhaps Seagal has turned his career into a long-running joke by now and most of us are just too ignorant to appreciate his genius. Or, more likely, he started down a slippery slope and may never recover.

Michael Keusch is back in the director's chair and, considering how bad his previous effort was, this fact didn't fill me with joy. I was right to be apprehensive, the movie is just plain bad on almost every level. The acting is, as you'd probably expect by now, pretty dire. The sets and scenery seem to have been leased from The Asylum (e.g. a number of plain environments in which to have action sequences and a number of interior shots featuring machines that go ping!), the editing is often painfully bad and there's even footage cribbed from other movies to save cash. Oh dear, oh dear.

Seagal is even worse than usual and the only cast member I actually didn't mind watching onscreen was the lovely Ciera Payton as the woman inexplicably fond of Sands. Yet another one to avoid. 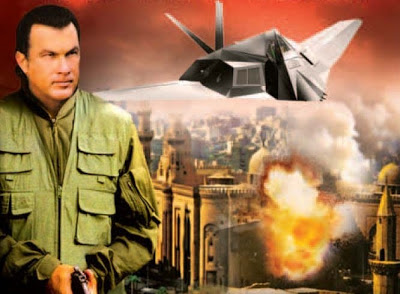