Sara Gilbert plays Sylvie Cooper, the young girl who finds herself developing a friendship with the strange and exciting Ivy (Barrymore). The two soon become inseparable, which helps Sylvie no end as she deals with the continuing illness that keeps her mother (Cheryl Ladd) bedridden and the animosity that she has for her father (Tom Skerritt). But friendship can quickly sour and Sylvie soon starts to envy Ivy, with her free spirit and her ability to get attention and the fact that she doesn't mind shopping for new fashion choices that Sylvie usually ends up paying for. Things get even worse when Ivy takes things further, scheming and manipulating to get exactly what she wants.

Director Katt Shea doesn't really have a lengthy, glowing filmography but she actually does very good work and certainly meet audience expectations (and, hey, I even quite enjoyed The Rage: Carrie II despite expecting to hate it). She's helped here by a decent script (co-written by herself and Andy Ruben) based on a story by Melissa Goddard, something that titillates and teases in places while also ensuring that viewers stay considerate of the very differing personalities onscreen and how they're affecting each other.

The camerawork is perfectly fine, though the soundtrack is a bit cliche and cheesy in places (a bit of soft rock here, a saxophone moment there), but the cast make up for any shortcomings elsewhere. Sara Gilbert is likeable and understandably emotional, Drew Barrymore is a fantastic potential femme fatale - sexy, persuasive and always just playful enough to avoid being hated. Tom Skerritt does well as the flawed father figure and Cheryl Ladd is very good indeed as a woman tired of living with her ongoing health problems. 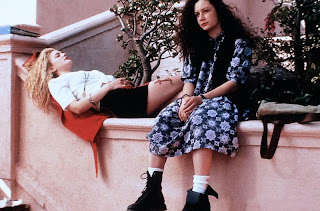