It's another cannily-titled cash-in from our friends at The Asylum and if you can't guess the movie they're hoping to emulate then perhaps you deserve to be forced into watching the thing. But, before I get carried away with easy mockery and insults, I must just say that this is far from the worst of the movies to come from The Asylum. In fact, it's actually almost good though these films always lose a few points for the cynical way that sees them being created in the first place.

The Titanic II is a ship (hence the title, this is NOT a sequel to James Cameron's Titanic) that is due to travel on the same journey as the original Titanic did exactly one hundred years previously. If you're superstitious then you may not want to get on the ship but plenty of people (desperate actors, desperate wannabe models and out-of-work service staff, by the looks of things) throw caution to the wind and grab themselves a ticket. Well, of all the unlikely and unfortunate events to occur, a huge ice shelf breaks off many miles away and sends a tsunami wave towards the ship. There are also big blocks of ice that may cause quite a bit of damage. Oh, and another wave is due to head their way that's even bigger.

Directed and written by Shane Van Dyke (son of Barry Van Dyke and grandson of Dick Van Dyke), Titanic II actually does what it sets out to do fairly well. It sets up the main characters, sketches out the leanest of backstories, throws onscreen a load of disposable victims and gets the threat developed as quickly as possible. The FX work is disappointing but also an improvement on past works from the studio.

Shane Van Dyke also takes one of the main roles and he's not too bad. Okay, nobody is too great either but I'd have to concede that the acting here is also an improvement over past efforts from The Asylum. Marie Westbrook and Michelle Glavan aren't the best actresses but are likeable enough as the destruction threatens them at every turn. Brooke Burns is also okay and Bruce Davison deserves better at this stage in his career but works well with what he's given. Everyone else overacts appropriately and gets to throw themselves around as the camera tilts and judders to simulate the effects of a ship being battered in the middle of the ocean. 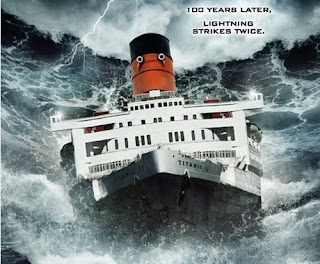