As a major hurricane starts to move into the area, Haley (Kaya Scodelario) ignores all of the warnings to drive further into the danger zone and find her father (Barry Pepper). She hasn't been able to get a hold of him and it's a worry. She eventually finds him, underneath a house and badly injured. Oh, and there are a number of alligators that have also decided to pop round for a visit. Can Haley, with her exceptional swimming skills, help both of them to survive this ordeal?

Crawl is a fun creature feature, but it's not one you can watch with without making an effort to consciously switch your brain off. If you know anything about alligators then this may be harder, but if you go with the flow then you're going to have a good time.

The main cast members to enjoy here are the alligators, impressively realistic CG creations that remain feeling like a physical threat as soon as their presence is made known. That's not to take anything away from Scodelario though, who gives a performance that requires every ounce of her focus and strength. Pepper, by comparison, gets to spend a lot of the movie fairly prone and relaxed (well, as relaxed as you can be after being bitten by alligators that are still prowling around your home). He's good, but he's mainly there to motivate Scodelario in different ways. Other people do appear, but they're really just there to become a snack for the dangerous predators.

Written by Michael and Shawn Rasmussen, the structure is nice and tight (the runtime is 87 minutes), with the premise being set up quickly enough before the tension and thrills start to be added on. It becomes clear early on that they don't really care about the reality of the situation, instead doing enough to ground the movie reality of the situation (one in which a human can outswim an alligator, which is just one of the differences between reality and what is depicted here).

Director Alexandre Aja is no stranger to this type of thing, having provided superb tension and thrills in many of his previous movies (and at least he keeps this a lot more grounded than the enjoyable silliness of Piranha 3D). He knows how to set up the geography of the cramped location, how to get everyone where they need to be, and how to shoot some great set-pieces that alternate between having the alligators front and centre in a way that provides some jumps and having them gliding underwater to be an invisible menace.

This is not a serious study of what happens when a large predator is suddenly added to an environment normally fairly safe for humans. It's just fun, and manages to be fun from start to finish. We've already had sharks being used this way (in the likes of Deep Blue Sea and Bait), so it's good to see the alligators getting some time to shine. And when I say time to shine I mean time to hunt down humans and try to bite massive chunks out of them. 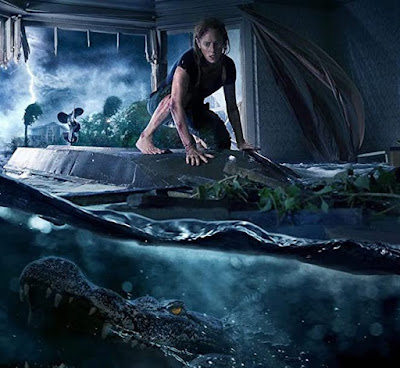