Let me be up front right now by declaring how much I enjoy Scary Stories To Tell In The Dark, even if I haven't ever read any of the books it is based on (they seem to be a cross between Goosebumps tales and urban legends). It really works for me, thanks to the wonderful atmosphere, the set-pieces, and the young cast all doing their best to sell it. Unfortunately, despite my own feelings on it, I struggle to think of people I would unconditionally recommend it to. I'll come back to that later.

The story concerns a group of young teens who find themselves in a local "haunted house" when they are being chased by a violent bully. They also find themselves a book of stories, apparently written by Sarah Bellows (a young woman who died some years ago, after a troubled life). When Stella (Zoe Colletti) reads the book in her home, she sees a new story. It's all about a scarecrow that comes to life, moving through the corn and killing someone. And it turns out that the story really happened. The group are now in danger. The stories will appear, and each one of them could be dead by the time the last word is written.

One of many films produced by Guillermo del Toro, but this time he also helped work on the general shape of the screenplay, aided by Patrick Melton and Marcus Dunstan, with the main credit then going to Dan and Kevin Hageman. It's easy to see why this would appeal to Del Toro, it's a film that is essentially about the power of storytelling and what repercussions can stem from the truth being hidden away when it yearns to be set free.

But it's André Øvredal in the director's chair, which brings a different style to the whole thing. This is a dark and unpleasant film, at times, with muted colours and shadows encroaching whenever a main story is about to be played out. Øvredal is happy to start off having viewers thinking this will be a light and fun film, gradually make things darker and darker, and then turn everything around again for a finale that ends up, sadly, feeling overly familiar and weak.

It's the shifting of tone that both helps and hinders the movie, and makes it so hard to recommend. I assumed this was a horror movie aimed at kids. It's not. Well, it's aimed at those who have fond memories of the books, from what I can gather, but also works well for a young teen demographic (I would say 13-15 year olds could really enjoy this, if they can get through the fairly horror-free first act).

If the tone never feels truly settled, the same cannot be said of the fantastic young cast. Colletti is a bright lead, Gabriel Rush and Austin Zajur are equally good as her friends, and Michael Garza is effective as the new kid in town, Ramon, who gets dragged into the whole dangerous adventure. Austin Abrams is all sneer and rage as the bully, Tommy, and Natalie Ganzhorn gets a big moment in a tale familiar to anyone who has heard any urban legends about big spots. There isn't too much screentime given to adults, but it's always good to see both Dean Norris and Gil Bellows in film roles, the latter playing a Police Chief who obviously doesn't believe the kids until he gets to see something wild with his own eyes.

I first saw this movie a few weeks ago. I decided that I couldn't settle on my final opinion, so I waited. And waited. Until I rewatched it again this week. I'm glad I did. Without waiting for the movie to conform to any expectations I may have had, I enjoyed it a lot more. There are some impressive special effects, some very memorable set-pieces, and a decent enough story to pin everything on, even if it does mean that it needs resolved during those disappointing end scenes.

You can buy the movie here.
Americans can buy it here.
Or click either link and shop for whatever you want. That helps me, so win win. 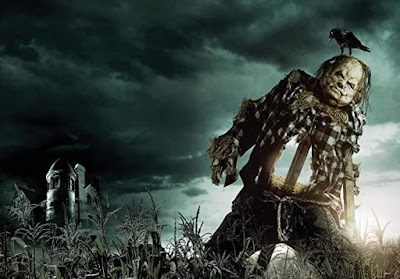