If you're going to watch one movie about a possessed killer drone then it may as well be this one, a film that does a lot better with the premise than, for example, the recent reboot of Child's Play (there are a number of similarities here), and one that generally plays out much better than it probably should.

Neil Sandilands is "The Violator", a man who uses a drone to spy on females before making them his victims. Cornered by the police, the film starts off showing him being killed while holding on to his precious drone. There's an incident, of course, that puts his soul into that of the flying object, which then eventually ends up on the doorstep of a married couple, Chris (John Brotherton) and Rachel (Alex Essoe). That's when things start to get problematic, to say the least.

Directed by Jordan Rubin, who also co-wrote the script with Al and Jon Kaplan, this may not be as obviously hilarious throughout as one of their previous collaborations, Zombeavers, but it once again shows how the group have a real knack for taking a potentially ridiculous premise and managing to navigate the perfect tone throughout. The Drone starts off fairly light, despite a couple of death scenes within the first ten minutes, and it has a sense of mischief that works very nicely as small odd occurrences start to confuse the leads.

Brotherton and Essoe are both excellent in their roles, working well with one another and having a believable chemistry. Although not onscreen for long, Sandilands is allowed to make such a strong impression at the start that he casts a shadow over every minute the drone is present. Anita Briem is a lot of fun as an inappropriately flirtatious neighbour, Rex Linn does a decent enough job as a detective eventually called in to investigate the situation, and Christopher Matthew Cook somehow manages to keep a straight face during scenes in which the drone attempts to communicate with him and show him that he is actually his brother.

If you have read all of this review so far and laughed at the sheer preposterousness of the main premise, fear not. Rubin and the Kaplans are well aware of that. They play everything with a small sheen of self-awareness throughout, not stopping to point out anything in particular, but making the fun characters observe certain things, and allowing the journey to realisation to be littered with small moments of characters balking at the real explanation of events. It's a fine line, and walked well by all involved. The leads are fun and likeable, but the main premise is actually played pretty straight.

It helps that the pacing is perfect. The 82-minute runtime means it doesn't overstay its welcome. You get the set up, you get the occasional deaths, and then you get a second half that starts to build up both the bodycount and the very real threat to the leads.

Far from a perfect film, but kind of perfect entertainment (if you know what I mean). The Drone is recommended if you want a fun distraction that clocks in under an hour and a half. 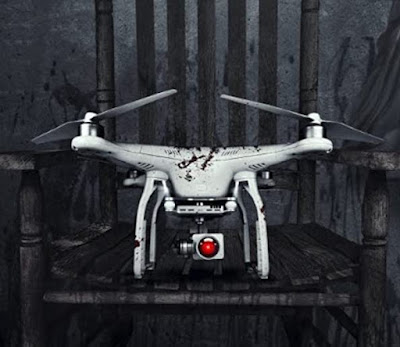