Based on a magazine article by Jessica Pressler, Hustlers is a slick and engaging tale of a group of women who worked together to make themselves into modern day Robin Hood types. If Robin Hood had been a stripper, and if he'd also kept the money for himself and his friends (because they really deserved it).

Constance Wu is Destiny, a young woman who is just starting her career as a stripper. She isn't doing too well, but things start to look up when she is taken under the wing of the very talented Ramona (Jennifer Lopez). But everyone's fortunes change during the financial crash near the start of the 21st-century. The clubs get different kinds of clients, the women working there start to do a lot more for a lot less money, and that's when Hustlers really begins, with Ramona coming up with a grand plan to find rich men and wring as much out of their credit cards as possible. It seems like a good plan, but as we're viewing the tale while Destiny tells it to a reporter (Julia Stiles), it's clear that all did not continue to go well.

Hustlers is bright, flashy, and makes great use of the cast, especially Lopez in a role that allows her to showcase sex appeal that many actresses half her age would struggle to emulate. She seems to know how great her role is, seizing it with both hands (and it helps that her first moment onscreen is an astonishingly good stage routine).

Writer-director Lorene Scafaria has a small, but enjoyable, filmography (it's also worth checking out her acting credits), but Hustlers is her biggest film yet, in terms of the core cast, the release, and the overwhelmingly positive reception. That's a good result, and deserved. She strikes a good balance here to make it clear how these characters can easily find so many male victims using their obvious charms without having them be semi-naked and gyrating for every minute of their screentime.

Wu is very believable in the role of Destiny, the kind of young woman new to the stripping world but with enough sense to learn from others and prepare to make a decent living at it, Lopez steals the film, Mercedes Ruehl is a warm-hearted presence, playing an older club staff member who tries to look out for the girls, and you get a mix of memorable supporting players, including Cardi B, Lizzo, Madeline Brewer, Steven Boyer, and even a fleeting appearance from Frank Whaley. And Stiles does just fine in her role, helping to frame the main story with a surprisingly sweet payoff.

It's a shame that the main focus of the film, the hustle itself, almost feels like an afterthought. But, then again, I guess it WAS an afterthought, once the financial crash created such a different landscape for many workers in many different sectors. The hustle is fairly simple and crude, when you get right down to it, but worked so effectively because no man wanted to admit to the circumstances. This kind of thing just wouldn't happen if guys weren't so embarrassed about admitting they'd paid to watch an attractive woman dance in front of them. Maybe that's worth bearing in mind. 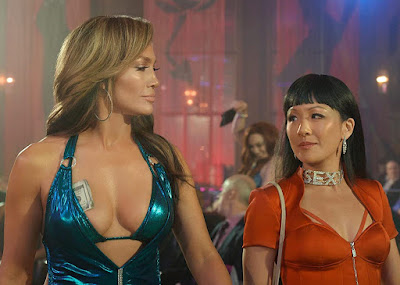