The second film in the trilogy of "Adventures" movies, Adventures Of A Private Eye is less overtly cringe-inducing than the film before it, yet also feels less entertaining at the same time.

Christopher Neil takes the lead this time, playing Bob West, a young man who works for a private detective (Judd Blake, played by Jon Pertwee). When his boss goes on holiday, Bob decides to pretend he is the main man, taking on a case involving a beautiful woman named Laura (Suzy Kendall), an inheritance, some blackmail, and even murder.

Once again directed by Stanley A. Long, with a script this time from Michael Armstrong, Adventures Of A Private Eye is what you might call perfunctory, at best. Although following the template of the previous film, in a way (the main narrative is interspersed with a number of comedic "sketch" moments), this feels altogether more fragmented and messier. The film is better than the one preceding it, in some ways, and yet worse, because of it just being surprisingly dull.

You do get, as expected, some nudity and random sexual encounters, but the focus here is more on Bob trying, and often failing, to make himself appear like a skilled and smart detective. Which would all be well and good if the case at the heart of things was in any way interesting. Look, I'm not daft (well . . . not all the time). I know what the film is aiming for. But when the plot ends up being built around a mystery element then that element should be strong enough to make up for the times when those seeking titillation and giggles are not getting either of those things.

Neil isn't too bad in the main role, he tries hard to be charming enough to everyone around him while also hoping to cover up his incompetence. Kendall is as lovely as ever, although her performance is quite flat for most of the runtime, and it would have been interesting to make her a more intriguing character with the potential to be a lot less innocent than she appears. The rest of the cast is a great mix of familiar faces from this time, from the charismatic Pertwee to Harry H. Corbett, from Adrienne Posta (returning to the series in a completely different role) and Angela Scoular (same as Posta) to Anna Quayle, Irene Handl, Liz Fraser, and the wonderful Willie Rushton (who gets far too little time onscreen).

After weighing up the good and the bad, I have ended up rating this just below Adventures Of A Taxi Driver. Although it may seem unlikely, this feels more clumsy in how it is plotted and put together. It will kill an hour and a half, it's another film of interest to anyone who enjoys digging in to explore the variety of British cinema releases over the year, but it's an oddly childish tale without any truly satisfying set-pieces. 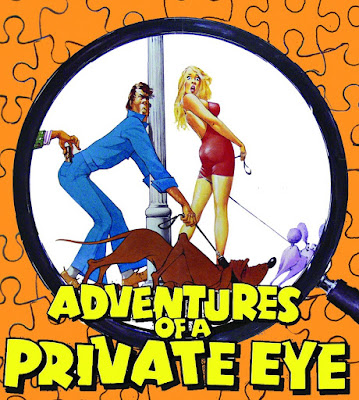