As I have very occasionally done before, this time on Shudder Saturday I am covering a show that they have provided on the streaming service, rather than any one movie. I was previously going to do this with Creepshow, their highly anticipated spin-off from the popular anthology movie, but I figured too many people would be upset if I just spent one blog post trying to find fifty different ways to say "lazy pile of shit".

Anyway, to Cursed Films, a 5-episode series (to date) that features, in order, The Exorcist, The Omen, Poltergeist, The Crow, and Twilight Zone: The Movie.

It's generally a bit weak, to put it mildly. What the show does best is show how people will interpret certain events because of their own views. It's almost an enjoyable study of confirmation bias, and if the makers of the show had decided to pick apart the theories with that in mind then I dare say that this could have been a much more interesting watch.

If you are familiar with The Exorcist then you probably know everything that crops up in the first episode. It's easy to see why the movie was chosen as the first title to be looked at. It's also arguably the biggest disappointment of the whole series, with the content displayed being a mix of something covered much more effectively in many other discussions (including the excellent documentary from Mark Kermode) and some absolute balderdash that shows someone offering exorcisms to a couple of people who seem clearly in need of some extra care from their fellow humans.

The Omen is similar, a regurgitation of many stories that have been told many times before. Yet, because more of The Omen stories are near-misses and could-have-beens, it feels much more tenuous. Something less powerful turned into something marketable by those who were involved in the making of the movie.

Things pick up with the episode on the Poltergeist movies, thanks to the involvement of many people who speak honestly about their own emotional pain after the premature death of young Heather O'Rourke and some wonderfully candid clips (including an archival interview with Zelda Rubinstein) calling bullshit on the whole idea of a curse, and claiming it to be quite disrespectful to those who were more immediately impacted by the loss of loved ones. It's a shame you also get a tangent with some location-hunters finding the house used for filming, and an amateur interview conducted with a neighbour who appears to give some needless "scoop" on the filming of the movie, but the good stuff here is better than anything in the first two episodes.

The Crow keeps things moving in the right direction. A lot of people know the story by now, and the parallels between Brandon Lee and his famous father, Bruce, but this takes you clearly through the chain of events, and explains how the film ended up being completed due to the wishes of those who knew that Brandon Lee was so pleased with his work in the movie. It's a shame that there wasn't a bit more time detailing the huge impact this had on the life of actor Michael Massee (the man who shot the gun, assuming it was all correct and as safe as these things are required to be on any movie set), but it generally gives you the familiar with an added personal connection from people who were directly involved with the movie.

Last, and by no means least, we get to Twilight Zone: The Movie. Be warned, there is footage here of the incident that led to the death of actor Vic Morrow and two young children that is up there with some of the most distressing content I have ever seen. It's real, it happens quickly, it's hard to believe it happened that way, and hard to believe they show it in this show. This is, however, the best episode in the whole series, because of the full picture built up by the many talking heads, and because of the raw nature of a number of archival clips. It's also a huge reminder that (and I LOVE his movies, met the guy, got a bluray signed, and got a pic) John Landis is a massive shit, who should have at least been found guilty of some manslaughter charge. He was a reckless asshole, and his career should have been over after this movie. The documentary doesn't quite cover things here as in-depth as it could (such as a certain rumour about important figures being quickly whisked away from the vicinity, or the way in which the jury on the main court case could have been . . . influenced), but it makes clear, despite the statements from one or two people, that Landis made the bad decisions that led to this tragedy. But, hey, he attended all three funerals, and actually got up to speak at Vic Morrow's funeral, rambling about the immortality Morrow had onscreen. He's clearly upset, which is at least something, but that takes some level of nerve, considering the fact that people state Morrow wasn't really enamoured by Landis, and took the gig because of the involvement of Spielberg.

Each episode is just under half an hour, so I WOULD recommend watching the whole thing (especially if you are a younger horror fan, or a newcomer to the genre), but it's a shame that the quality only picks up in the second half. Although it's still a damn sight better than Creepshow (the series). 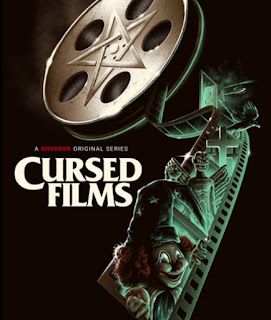