Gerard Butler returns to the role of Secret Service agent Mike Banning in this third in the "Fallen" action series, and you could do a lot worse if you're after a decent action thriller with some fun set-pieces throughout.

Banning seems to be, to put it bluntly, getting a bit too old for this shit. Which isn't a problem, because the President (Morgan Freeman) wants to promote him. A nice job with less chance of people trying to shoot him and blow him up. That's not an automatic yes for Mike though, having spent his life in the middle of the action. He's right back in it when an attempt is made on the President's life, framing him as the main suspect.

Yes, Angel Has Fallen is basically The Fugitive with Gerard Butler in the main role, which means more brutal violence and swearing than you got from Harrison Ford. And more Scottishness. I wish there had been an equivalent to Butler in his band of pursuers, just for us to get the glorious "right, all a yous lot git tae work noo, I want you to check every coffee hoose, dug hoose, oot hoose, doss hoose, Muirhoose, Broomhoose until we catch this bam."

If you have seen the previous two movies then there will be no doubt in your mind how this turns out. Banning is always the smartest and toughest guy in any scenario, so it's just a matter of time until he gets himself in the right place at the right time to take down the main villain. And speaking of main villain, if it isn't obvious to you as soon as they appear onscreen then you've never seen ANY movie before.

Ric Roman Waugh does a decent enough job with the direction, working from a screenplay he helped shape with Robert Mark Kamen and Matt Cook. You're not getting any particularly memorable dialogue, but the plotting and pacing both work quite well, and the assortment of characters help to make a fun mix.

Butler is once again having a lot of fun in the lead role, which is slightly infectious. You can happily start laughing as soon as someone threatens him with harm. Freeman is very Presidential, although he has a bit less to do when he ends up incapacitated for a lot of the runtime. Piper Perabo is at the stage of her career now where she plays "loving wife to the hero", she does fine with what she's given, and Lance Reddick is his usual dependable self as David Gentry, the director of the Secret Service. You also get Danny Huston as Wade Jennings, an old friend of our hero who immediately makes you suspicious of him by the fact that he's Danny Huston, and Nick Nolte steals a few scenes as Clay Banning, the absent father who has spent years living off the grid.

Not setting out to be subversive or clever, Angel Has Fallen is simply an entertaining action flick with moments of satisfyingly cathartic violence against nasty villains. Butler, and others carrying weapons, can carry off the look and feel of it all convincingly enough, making it easier to digest all of the nonsense without being overly critical of it all.

Get a triple-bill here.
Americans can get that same set here. 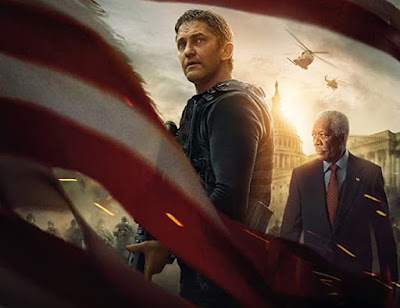