Before he became just as easy to dislike as many of his peers, and I am not entirely sure when that happened (I'm still a fan anyway), Ben Stiller scored a big hit with this enjoyable comedy of errors that harvested comedy gold from the fertile territory of that most potentially nerve-wracking of experiences, the meeting of people you want to be your future in-laws.

Stiller is Greg Focker, a nurse planning to propose to his partner, Pam Byrnes (Teri Polo). His plans have to change when Pam tells him that her sister has just agreed to get married, which then leads to the pair heading to Pam's home for the big family event. Pam's mother, Dina (played by Blythe Danner) is lovely enough, but her father, Jack (Robert De Niro), has a past that makes it impossible for him to trust those he doesn't know. And all he knows about Greg is that the man has designs on his daughter.

Based on a little-known 1992 comedy with the same premise, and title, Meet The Parents is a fantastic combination of a great cast working with an excellent script, helmed by an experienced comedy director who knows exactly how to make the most of every moment, be it big or small. Jay Roach is the person in the big chair, coming off the great success of the first two Austin Powers movies (and he'd also made Mystery, Alaska just before this, but I haven't seen that one yet), and he has enough experience to let things build progressively towards a finale that throws the characters into a perfect thunderstorm.

Jim Herzfeld and John Hamburg wrote the script, taking the main premise and ensuring that everything is more finely-tuned to make the most of the central cast, especially any moments featuring De Niro.

Stiller is perfect in the central role, focusing on being an unfortunate guy trying to do his best, with less of the angry outbursts that is such a firm part of his schtick in many other roles. Polo works well alongside him, with the two having enough natural rapport to make it believable enough that they might be able to maintain a serious relationship. Although not the focus of many scenes, Danner does well, but it's De Niro who gets most of the best moments, either on his own or directly opposite Stiller. His no-nonsense demeanour and lack of humour makes the comedic beats even funnier. You also get supporting turns from the likes of Jon Abrahams (a younger brother who causes trouble for our hero by hiding his weed in an unfortunate place), James Rebhorn, and Owen Wilson, great value as an ex-boyfriend who had nothing more than a very sexual and physical connection with Pam, as opposed to the stronger bond that she shares with Greg.

You also have a cat trained to use the toilet, a spycam or two dotted around to catch out liars, and a running joke about Greg not wanting to do a job more respectable than "just" being a nurse. It's all very safe and predictable, but that doesn't make it any less entertaining and funny. 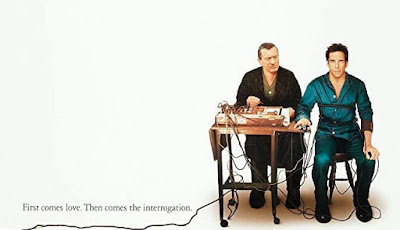