Some people put Bride Of Frankenstein above the original film. I am not one of those people. It loses a point for one important element - the performance from Una O'Connor. Never mind that now though, we'll come back to it later.

Most of the main players come back for this sequel, a story given a prologue in which Mary Shelley (Elsa Lanchester, who also plays the famous bride) tells her guests that there is more to the tale of Frankenstein than just her original story. She then proceeds to pick up from the end of the first film. Frankenstein has survived, his creature has also survived, and we get Doctor Pretorius (Ernest Thesiger) added to the mix, an unscrupulous man who hopes to use Frankenstein's work to better his own.

William Hurlbut is the main credited writer this time around, although there are numerous other names who had a hand in crafting the screenplay, and James Whale is back in the director's chair, and it's clear that this is a film even more concerned with showing that the perceived monster isn't really the monster. In fact, he behaves better than almost all of the human characters that we see onscreen.

Thesiger is a lot of fun in his role, callous and calculating even as he seems to delude himself into thinking that he has good intentions, and both Clive and Karloff remain fantastic as the main creator and creation. Dwight Frye also returns, playing a different character not a million miles away from the one he played in the previous entry. Valerie Hobson takes over the role of Elizabeth, doing just fine in the role, and O. P. Heggie makes the most of his role, a blind hermit who befriends the monster and offers him some hospitality (a sequence among many brilliantly parodied in Young Frankenstein). Then we have Una O'Connor, mentioned in the first paragraph. I don't blame her for her performance, it was obviously asked of her, but I do find her to be one of the most irritating characters I have had to tolerate in any of the classic Universal horrors. Shrill and twitchy, I am constantly bemused when I hear from other viewers who enjoy her comic relief.

That performance from O'Connor IS enough for me to drop a point from my rating, but it's not enough for me to dissuade anyone from viewing, and loving, this horror classic. It's arguably the best of the sequels to the iconic horrors of this age and it often feels natural to stick it on for a watch as soon as the first film has finished.


This is a great collection for any fan.
This is it available in America.
And here is the Dead By Dawn schedule/site. 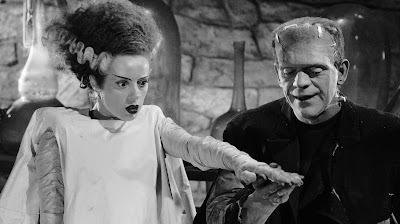