There are two types of movies that I find very difficult to write reviews for. The first type is the movie that everyone has seen. There are a million reviews out there already, and sometimes even full books about why they have impacted us over the years. The second type is the classic film that I want to write about, but fear my own opinion should be complemeneted by a full selection of facts, figures, academia, and historical context. Nosferatu falls into the second category.

The basic story is all about . . . well, why bother pretending, it's an interpretation of Bram Stoker's Dracula. Instead of that Count being the main figure, however, we have a more rat-like Count Orlok (Max Schrek). Hutter (Gustav von Wangenheim) is the estate agent sent out to close a deal with the Count, and he ends up trapped when Orlock becomes determined to sail overseas and obsess over Hutter's lovely lady, Ellen (Greta Schoder). The rest of the film shows Orlock trying to get his own way, Hutter trying to get home, and Ellen mulling over a plan that might just save everyone in town.

Directed by F. W. Murnau, Nosferatu is a classic, silent, horror film that we are lucky to still have with us today, not least because a lawsuit brought by Bram Stoker's widow ended with a judgement for all known prints and negatives to be destroyed. The script by Henrik Galeen recreates many of the highlights of the Stoker novel and adds one or two impressive new touches (such as the way in which a vampire may be destroyed).

It's always hard to judge certain factors in silent films, with the acting being especially difficult to compare. Suffice to say that Von Wangenheim and Schoder both do fine in their roles, Alexander Granach is a lot of fun in the role of Knock (Hutter's boss who comes under the spell of Orlock and becomes quite the Renfield figure), and Schreck is iconic and unforgettable as the Count himself, helped by the wonderful make-up.

The effects hold up pretty well, there are moments that you've already seen a dozen times even if you've yet to see the whole film (Orlock's shadow creeping up the staircase, for example), and it's safe to say that this remains an influential and entertaining touchstone for the horror genre in cinema.

If you haven't seen it yet then do so ASAP. If you have seen it then remind others that they should check it out.

Note - Nosferatu was screened with accompanying live piano from Forrester Pyke, and I highly recommend seeing it in this way if ever possible. A wonderful experience, and kudos to Mr. Pyke for his talented tinkling of the ivories.

Here's a nice version of the film on disc. 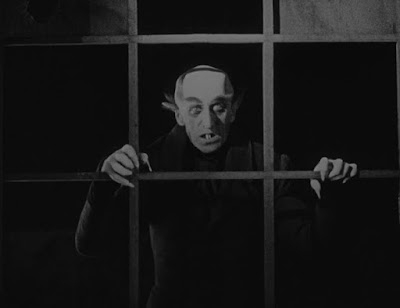