Here is what I used to know about Flowers In The Attic. It was based on a very popular book, the first in a series, by V. C. Andrews (AKA Virginia C. Andrews). It had something to do with family members being a lot more familiar with one another than they should be. And it probably wasn't something I would be very interested in.

I was right on the first two points, but oh so wrong with my last assumption. Although I have never read any of the original novels, I have finally (thanks to a recent release from Arrow Video) seen the film version and it is quite the experience. Sometimes dark and twisted, sometimes unintentionally hilarious, it's an entertainingly bonkers presentation of a story that isn't exactly safe and dull to begin with.

Victoria Tennant plays a woman who moves back home with her four children (the two eldest played by Jeb Stuart Adams and Kristy Swanson) after the sudden death of her husband. It's the only way she can think of keeping everyone in line for a comfortable lifestyle, as she hopes to regain the love of her dying father just in time to get some of that nice inheritance money. Her mother (Louise Fletcher) is unimpressed, and certainly doesn't seem to have any warm and fuzzy feelings towards her grandchildren, for reasons that are soon made clear. It's not long until the kids are spending most of their time in the attic, initially happy to be left alone until it starts to feel as if they are being left up there to rot.

Directed by Jeffrey Bloom, who also adapted the source material into screenplay form, Flowers In The Attic knows exactly what it wants to be and admirably does just that. There's no pretension here, no attempts to twist the major story events into something more palatable and polished, and the fact that it isn't often very cinematic doesn't detract enough from the sheer fun of the outrageous melodrama.

And Bloom made sure that all of his cast were on the same page. Tennant gives one of her most enjoyable turns as the scheming parent, arguably even more fun here than she was while being deliberately comedic in All Of Me. Fletcher gives another fantastically cold performance, and Swanson and Adams always look suitably victimised and affected by their strange, restrictive, upbrining. Ben Ryan Ganger and Lindsay Parker play the two younger children, and do what is asked of them.

Although it's hard to watch this film with a straight face, it's also hard to disagree with how all of the ingredients are mixed into such a gothic-tinged, heady brew. Bloom knows the audience, knows to keep the characters emotionally overwrought, and knows that the dark concepts at the heart of the story are strong enough to offset any potential pacing issues in the middle section.

I am already looking forward to seeing the other filmed version of this tale, as well as the other TV movies adapted from the rest of the novels in the series. Watch this space.

The shiny new release of Flowers In The Attic can be bought here.
Americans can get this here disc . . . . here. 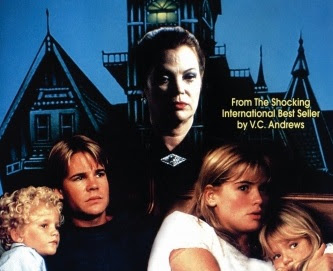