I was, like a lot of people, hesitant (to say the least) when I heard the announcement of a belated sequel to Jumanji. The first film may not be a perfect classic, but it feels that way to many. And updating it to turn it into a videogame? Would it move too far away from the core fun of the first film?

Thankfully, what we have here is a sequel that is easily the equal of the first film, AND it actually follows on in a way that feels surprisingly natural.

The main plot sees four kids ending up in detention together. They find an old videogame called Jumanji, decided to give it a go, and are immediately sucked into the game world. The scared nerd is transformed into a muscular hero (Dwayne Johnson), the "jock" is reduced to a rather weak backpack valet (Kevin Hart), the smart girl becomes a strong and sexy woman who can impressively dance fight (Karen Gillan), and the selfie-obsessed vain girl becomes a chubby male professor/cartographer (Jack Black). There's someone else already stuck in the game (Nick Jonas) and a villain who wants to ensure that Jumanji stays the way it is forever, because he likes it that way (Bobby Cannavale).

Directed by Jake Kasdan, Jumanji: Welcome To The Jungle shows how best to update a concept without dismissing everything that came beforehand (in movie terms anyway, I never did see any of the animated TV show). It feels organic as we move from the setting of the first movie through to the modern day, and the script, developing an idea from Chris McKenna, packs in a great mix of action, comedy, and the obligatory personal growth (although, admittedly, some of those growth moments feel a bit rushed). There are a number of nods to the first film, some more obvious than others, and everything feels as if real care was taken to create something less lazy and cynical than some other belated sequels/remakes/reboots I could mention.

The cast are all superb. Johnson and Hart are two for two now as a winning central pairing, Gillan shows she can still do the comedy along with the kickass action, and Black is enjoyably over the top as a young girl stuck in the body of a middle-aged man. The lone Jonas brother of the cast does just fine, and Cannavale is an enjoyable villain, pitched perfectly to be a proper menace and scary enough for the kids to be thrilled. Although I won't name them here, the younger cast also do well, bookending the film with their real life moments that give us all of the information we need for the journey they go on through Jumanji.

Some viewers may be a bit disappointed that this stays within the game world, as opposed to the game elements crashing into our world, but the many little details and fresh elements make it a wise decision, rather than just completely rehashing the original.

The film can be bought here.
Americans can pick it up here. 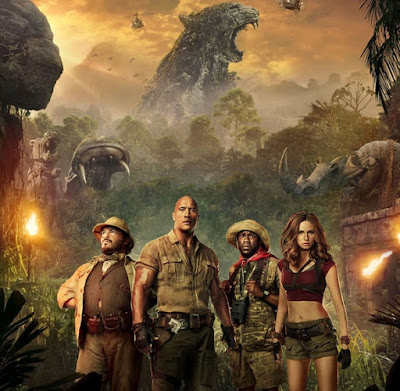