It's the same old story when it comes to beloved film franchise instalments. Fans complain if something feels too beholden to everything that has come before it and then you also get an outcry if they think something has made too many changes to the characters or material they have grown with over a number of years.

I can just imagine writer/director Rian Johnson rubbing his hands together in glee as he clicked everything into place for this film, undoubtedly under the watchful eyes of many people with a vested interest in what is probably the most profitable moneymakers in cinema history, in terms of combined box office and merchandising. This is a film that manages to emulate the feeling of devastation and insurmountable odds that featured in The Empire Strikes Back while also still managing to do enough to stand out as something surprisingly unique.

A lot of that comes from the visual design, with a number of set-pieces making the most of the colour red, either alone or as it contrasts with the environment (in much the same way that gunfights and swordfights can be elevated when blood is spattering on to crisp, white snow). More of that unique feeling comes from the ways in which the main characters are shown to have been transformed by their experiences, be they recent or years in the past. Luke is very different from when we last saw him (something that Mark Hamill famously, initially, disagreed with Johnson on). Leia is even more of a military leader than ever before. Kylo Ren continues to try to find a way forward that will give him both notoriety and some personal satisfaction, Rey may or may not be destined to be a Jedi, and heroic pilot Poe Dameron may have to accept the fact that his rash actions are costing too many lives for him to keep careening forward without enough consideration of the risks and reward.

I guess I should mention the plot, although I feel like I already have. Sort of. The Last Jedi is a character piece, it's a war film, it's a sci-fi epic showing entertaining fights that also manages to show people starting to fully realise the consequences of their actions, be they small or huge. That's what it's all about, and the various twists and turns of the plot are largely redundant "filler", in some ways, if you consider how the whole thing begins and ends (wait and see).

Most of the main players from The Force Awakens return, and they're all still very good in their roles. Daisy Ridley and John Boyega remain two sides of a coin depicting unlikely heroes, with the former wondering if she can ever learn to use the force and the latter doing whatever he can physically to give allies time and space. Oscar Isaac continues to be a hugely likable presence as Dameron, which is more essential this time as his character makes a couple of dubious judgment calls. Hamill is very good, darker than we've ever seen him before, Fisher gets a fitting final turn as Leia, and both Adam Driver and Domnhall Gleeson are as entertaining in their evil roles as they were the first time around. Benicio Del Toro and Laura Dern are two of the main newcomers, both do well but it's Dern who is given the better character.

You also get to see BB-8 again, Kelly Marie Tan (another newcomer) is pretty great as Rose Tico, someone else willing to keep doing their part for the war even as the odds become more and more overwhelming, there's a small amount of screentime for Captain Phasma (Gwendoline Christie), Andy Serkis portrays the mysterious Snoke, there's a near-overdose of cuteness in the shape of little creatures called porgs, a near-overdose of CGI in a completely superfluous chase sequence reminiscent of the overstuffed prequel trilogy, plenty of cameo appearances (both obvious and really not so obvious - hard to see faces under those trooper helmets), and another fantastic score from John Williams.

Some will hate it, some will love it. I love it, and I hope that eventually even those who were so up in arms about the decisions made will recognise that Johnson did what needed to be done in order to keep the franchise from fading out before this new story arc was completed.

The Last Jedi is out on shiny disc today, here in the UK.
Americans can pick it up here. 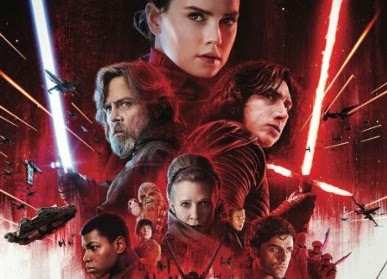