A smart and stylish take on the vampire mythos from writer/director Guillermo del Toro, Cronos is one of the best modern vampire movies to offer someone who claims that the subgenre is overcrowded and tired. Everything can be given a fresh coat of paint, it just takes someone to come along with the right brush strokes.

The cronos device was created many years ago by an alchemist who hoped to give himself some kind of eternal life. With the help of an unusual insect at the heart of the device and some interesting and complex internal mechanisms it would seem that the alchemist succeeded. But eternal life is only ever guaranteed if you avoid every misfortune possible, which the alchemist doesn't manage to do. The cronos device falls into the hands of Jesus Gris (Federico Luppi), a man who doesn't realise what power it has. He soon starts to put the pieces together, however, when he sees the device in action and when he is visited by someone (Angel de la Guardia, played by Ron Perlman) trying to persuade him to hand it over. Angel doesn't even want it for his own use, he's been tasked to get the device by his uncle (Claudio Brook), but he takes his responsibilities seriously when it has a chance of affecting how good an inheritance he can get. Meanwhile, Jesus starts to realise just how much of a blessing and a curse the cronos device can be.

Cronos is, to me, one of the best vampire movies of the 1990s and certainly an intelligent and interesting take on the material. It's surely no small coincidence that an insect lies at the heart of the proceedings here and that del Toro's first big Hollywood movie was the cockroach-infested Mimic. The man certainly finds bugs interesting and has made good use of them onscreen a number of times. Perhaps it's their design and aesthetics, perhaps it's how alien they seem, perhaps it's just the reaction they often provoke - whatever the reason, Cronos is a great chance for the man to use bugs in horror in a new and unusual way. It's also another movie that shows yet again why the traits of men and insects shouldn't be mixed up. We might be in territory that seems a million miles away from The Fly but the two movies are quite closely related once you start to see the themes being explored and the nature of the horror on display.

The script mixes everything quite wonderfully, balancing genuine moments of warmth and humanity with some over the top outbursts as the cronos device affects the lives of those who know all about it. There's also a great streak of macabre humour that makes the darker moments more palatable, leaving audiences free to think more about the choices being offered to people as opposed to just taking everything as it's shown.

We know now just what a great visionary director Guillermo del Toro is but people who caught Cronos back in the 90s could already see the potential for greatness there. I'm lucky enough to count myself as one of those fans who discovered a real gem (and I'm sure there are many other horror fans who were bowled over at the time) but his writing and direction are really helped by superb performances from everyone involved. Federico Luppi is so good in the lead role that he keeps you on his side from start to finish, despite some horrible and degrading moments that show just how the device is changing him. Perlman is also very good, as much a victim of his uncle as he is an occasional bully to others. Claudio Brook, Tamara Shanath and Margarita Isabel are also fantastic, fleshing out a small cast that you genuinely warm to and grow to care for.

Cronos won't necessarily barge its way to the top of your favourite movie list but it's the kind of quality, thoughtful, unique horror movie that should (I hope) be remembered and appreciated for many years to come. And it's essential viewing for fans of vampire movies. 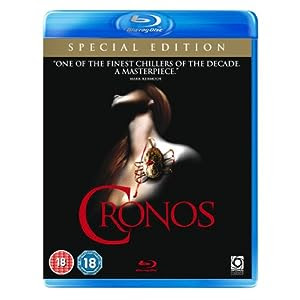