There was a lot of buzz about Killer Unicorn before I settled down to watch it. The word was that this was a fantastic gay slasher movie with a fine line in twisted humour. It certainly almost IS all of that, it's just not good enough to be classed as fantastic.

Young Danny (Alejandro La Rosa) survives a close encounter with a unicorn-mask-wearing killer, putting him understandably on edge at the start of the movie. Skip forward a year, Danny is being taken for a big night out by his friends. They refuse to let him miss out on the big party event of the year, despite his anxiety.

A feature debut from director Drew Bolton and writer José D. Álvarez (also starring onscreen, as Puppypup), this is the third movie, I think, that I've seen that could be classed as a gay slasher. It joins the ranks of both Hellbent and Knife + Heart. And it falls below both of those.

Leaving aside the quality of the acting just now, the cast are a lively mix of characters. La Rosa plays arguably the dullest of them all, and he is outshone in scenes that feature Markus Kelle, Monica Garcia Bradley, Jroyce Jata, Christopher Vancleave, and Grayson Squire, all playing characters with names that include MDME Mortimer, Coke, and Horse Foo. They're all very ready to party, potential killer threat be damned, and that both energises the film while also making it tougher to be invested in it. Nobody seems to really care about what's going on, until the time comes for them to be personally endangered, and that means viewers don't really care.

The script seems to be the weakest element. Álvarez doesn't seem to have really thought things through, and certainly decided not to flesh out any of the main characters (who are displayed in relation to what stage of partying they're currently at). There are some enjoyably inventive death scenes, and the killer is both amusing and silently menacing, but things seem to bounce from one moment to the next like a drunk party guest trying to ask people for a lift home after missing the last bus. And let's not dwell on the ending, which is equally amusing and frustrating in the way it so suddenly puts an end to the proceedings.

Bolton doesn't do a terrible job, but someone with more experience might have been able to cover over some of the cracks, in terms of the script and also the production design (some scenes look great, some scenes are simply unable to convey the energy and atmosphere clearly being reached for). Everything feels as if it needs just a bit more time, and/or a bit more money. As well as a much better writer involved.

Gorehounds will enjoy some of the set-pieces, and members of the LGBTQ+ community should enjoy the variety of colourful leads, but this should have been much better. 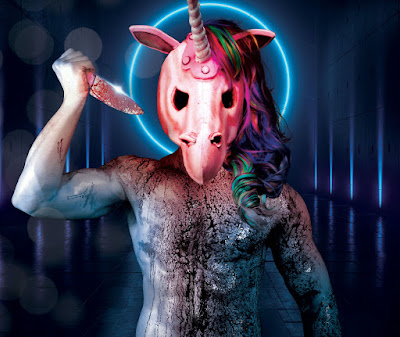