Charlie Steeds has directed about half a dozen features before this one, which I am going to insist on referring to by the better title of After Dark (EVEN if it eventually ends up being forced to go under the far-less-enjoyable title of Vampire Virus). I haven't seen any of his other works, but I've heard some praise for them, especially The Barge People, which I need to see soon.

After Dark is a familiar tale, a woman (Jennifer, played by Natalie Martins) has herself a nice sexy time and then finds that she's feeling quite different after. It turns out that she's been vampirised, which adds tension to her relationship with her friend/co-tenant Jack (Peter Lofsgard), who happens to be dating a police officer (Freddie, played by Derek Nelson). And that police officer is part of a special squad looking to take care of a vampire menace.

The look and feel of After Dark is very much in line with some beloved vampire movies from the 1980s (this is very much a distant relative to the likes of Fright Night and Vamp), which is a huge bonus. Although filmed mostly in the UK, it is set in America, and designed to feel like a pretty standardised American horror film. I don't mean that in a disparaging way, I just mean that it works extra hard to avoid looking like a low-budget, low-aiming, British indie flick.

The script, written by Steeds and Sam Ashurst, is lively and fun, happily running through the full range of dialogue and exchanges that you'd expect to find in a cool vampire movie, and everything unfolds at a cracking pace, thanks to the appeal of the central characters and the timing of some well-done gore gags.

Martins is very good in the lead role, perfect as both the uncertain and scared incarnation of her character and the strong and confident version, and she's capably supported by both Lofsgard and Nelson, even if the latter is more of a stereotypical role you can find in many other vampire/horror movies (he's basically a good cop still doing his job after being given a peek "behind the curtain). Then we have Jéssica Alonso, playing Izabella, the prime vampire who changes Jennifer's life.

You can, if you're that type of person, have fun spotting the many ways in which Steed and co. tried to cover up the fact that they were filming an American-set movie while not being actually in America. If you do that, however, then do balance out your critical eye with an appreciation of what ended up onscreen. This often looks great, and it's impressive to see a small film like this aim to be something more, something with ambition and scope that is rarely seen in smaller UK film releases.

Flawed, both in terms of the material and also the execution of the material, this is still worth your time, and I would say that it's very much worth your support. I'd rather have a few more films like this every year than the hundred other found-footage horror movies we've had that throw people into the British countryside and try to make a plus point of having very limited resources. 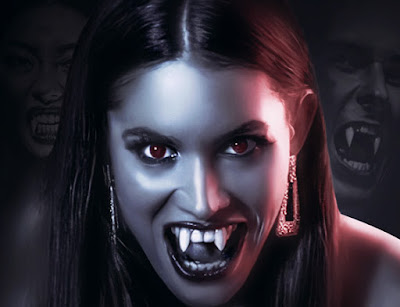