A slasher movie that utilises that interesting idea of a cursed film, Cut starts and ends strong, but suffers from a lack of decent characters, and a sagging middle section that makes it hard to care about whatever is at stake for those involved.

When the actor playing the killer in a movie, Hot Blooded!, goes berserk, killing the director and attacking the female lead, the movie is understandably canned. Many years later, a number of students decide that they should try to finish the film, tempted by the legendary status of it, and they manage to procure the lead, Vanessa Turnbill (Molly Ringwald), to help them complete it. But maybe it's destined to remain incomplete, especially after being cursed by the man who went mad while portraying the killer.

The directorial feature debut from Kimble Rendall (who did slightly better with his flawed sophomore effort, the shark-in-a-supermarket entertainment of Bait 3D), Cut is a film that consistently finds ways to leave viewers slightly disappointed. Most of that would seem to be the fault of Dave Warner, who wrote the script, which never turns into something as clever or witty as it wants to be. Perhaps not wanting to look too obviously derivative, it eschews most opportunities to get meta with the material, despite it being a slasher film in which the people are making a slasher film. The main deaths are pretty good, and enjoyably gory, but the actual killer isn't very memorable, although the source of his supernatural power is a solid idea.

Despite Kylie Minogue appearing onscreen for all of about two minutes, Ringwald is the main recognisable face here. As we are now well over three decades from her teen movie hits, can we acknowledge that she's never been that great an actress? She doesn't do a terrible job here, and it's good to have someone with her filmography in that role, but I would have much preferred any number of better candidates. At least she gets to make an impression though, although that's more for being Molly Ringwald than any characterisation in the script. As for Jessica Napier, Sarah Kants, Geoff Revell, and everyone else, they simply get to wander around onscreen until it's their time to be threatened by the killer.

In some ways, it's worth admiring both Rendall and Warner for not taking the easier option. Making this less of a straight slasher movie, and more of a comedy horror, would have made it more appealing to a wider audience, but it also would have made it similar to so many other slasher movies that aimed to subvert the tropes and sell itself more on its own self-awareness. The people making this clearly have faith in their central idea being strong enough to elevate things. Unfortunately, that's not the case. A lot more could have been done, in almost every main scene, to make this a much more entertaining film.

Not a complete waste of your time, but not one to make a high priority either. 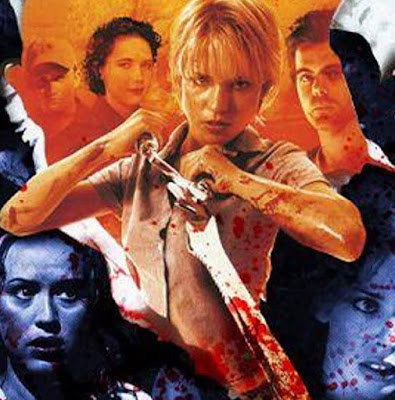