A riff on Fatal Attraction for the swiping generation, Bad Match is the kind of premise that I am sure has been done before, but it's hard to think of it being done as well. The blend of fun and proper nastiness here, in terms of the mean-spirited way that the plot tortures the "date 'em and ditch 'em" lead, is almost perfect for those after an entertaining thriller that doesn't want to become too complex, and doesn't need to stay chained to anything other than the onscreen logic.

Jack Cutmore-Scott is Harris, a man addicted to the thrill of swiping for attractive women. He has his patter nailed down, he likes to have a date, have some energetic sex, and then sneak away in the middle of the night as he gives some sweet parting words about doing it again soon and definitely intending to call. And then Harris meets Riley (Lili Simmons), a beautiful woman who doesn't really want to just be a one night stand/notch on a bedpost.

At the risk of sounding like an old fart, which I know I AM nowadays, nobody dates any more. Nobody needs to worry about making good conversation. If you want a relationship then you still need to make some effort, but it's never been easier to meet people purely for sex. I say that without meaning it as a bad thing. As sex has got easier for people to get, attitudes towards sex have become generally healthier. There will always be exceptions - the guys who want to slut-shame women for behaving the way they like their mates to behave, the people who mistake 50 Shades Of Grey for any standard d/s dynamic - but being more open about sex, and just being open about what we want, makes people a bit happier. Life's too short to be putting up with unsatisfying sex. Where it gets a lot less healthy is in the way some people become addicted to the swiping method. It's a numbers game to them, and they need to keep adding to their tally. Those people have always been out there, working in pubs and clubs as they aim towards another night in a different bed, but now they can reach so many more people with so relatively little effort.

In the role of Harris, Cutmore-Scott is pretty perfect. He has enough charm to be believable, and that even helps you to root for him as things start going very wrong, despite also considering the fact that he deserves at least some of what is happening to him. Simmons is also well-suited to her role, her looks and feigned innocence making it less immediately obvious to our lead just how far she is willing to go to upset his lifestyle. There are other people onscreen, and they all do good work, but the focus, quite rightly, remains on the two leads.

Writer-director David Chirchirillo goes for a lot of the obvious little moments en route to an enjoyably twisted final reel. It all starts with an alarm being switched off and an unplanned visit here and there, but quickly develops into job security being threatened, crimes being committed, and fraying threads of sanity. Chirchirillo also does well to have Harris be apologetic, but in ways that underline how little he really understands about the impact his predatory behaviour may have had on so many women.

This could easily have been a lightweight "teen thriller", it could have been absurd and still enjoyable, but Chirchirillo allows the main characters to keep digging and digging in a way that brings to mind that old proverb: "The person who pursues revenge should dig two graves."
Or maybe it's a whole new proverb. Two wrongs don't make a right, but too many swipes right can lead to wrongs! 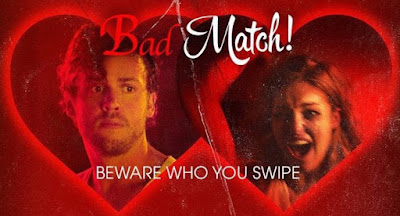