Nancy Drew And The Hidden Staircase (2019)

I've always been aware of Nancy Drew, but have never tried to read the source material. While a voracious reader as a child, something I carried into adulthood until time became more limited and movies became my main obsession, I tended to focus on the tales aimed at young boys, the likes of The Hardy Boys and The Three Investigators. There was a good mix in The Famous Five and The Secret Seven, but they still felt suitably boyish in their narrative. Nancy Drew, to my young and closed-off mind, was just a plucky girl who probably didn't get up to anything as exciting as her male counterparts.

Ah well. It's never too late. Maybe I should revisit my youth, this time including Nancy on my reading list. But at least I had a general idea of the character, from my limited exposure to her over the years. To put it in very simple terms, Nancy Drew is a smart young investigator. She's like a one-woman Scooby gang, without the big dog accompanying her. That's all you need to know to appreciate this enjoyable teen flick.

Things start with Nancy (Sophia Lillis) helping a friend get revenge on a bully. This gets her in trouble, which leads to her doing some community service. While doing this community service, Nancy ends up helping Flora (Linda Lavin), an elderly woman who has to endure strange occurrences in her haunted home. Flora's niece, Helen (Laura Slade Wiggins), ends up helping Nancy in her investigation, despite the disapproval of Nancy's friends, George (Zoe Renee) and Bess (Mackenzie Graham).

Based on source material that fans of Nancy will already be very much aware of, written by Mildred Wirt Benson (under the pen name of Carolyn Keene), Nancy Drew And The Hidden Staircase has a solid script from Nina Fiore and John Herrera (taking quite the sidestep from work that has been made up of genre TV shows, from The Vampire Diaries to The Purge) and fine work from director Katt Shea. You get the gist of the character from the opening scenes, you get the sense of fun mixed with the potential for very real, serious consequences, and you can see everything being slotted into place for a fun mystery that won't hold many surprises for anyone with experience of this kind of adventure, although it's probably pitched just right for younger viewers.

Lillis is great in the lead role, a perfect fit. She's absolutely believable as the smart, plucky investigator who cares about the people she is helping. Renee and Graham are also very good, friends who are willing to help, even while they disagree with the company that Nancy starts keeping, and Wiggins gets to enjoy a nicely-worked character arc. Andrew Matthew Welch is a sweet young man, Deputy Patrick, trying to help while he also tries to make sure that he upholds the law, and the adults are played by a likeable bunch, including Lavin, Sam Trammell (playing Nancy's father), Andrea Anders, and more. The villain of the piece is obvious, but also played in a way that doesn't let things descend into some kind of pantomime finale. The tone stays just right, not too scary for kids, but with some threat to the main characters that feels very real.

It may not be your first choice, especially if you're not a teenage girl (what can I say, I am happy to watch anything, and can always keep in touch with a teen version of me who is happier to watch movies aimed at any demographic), but Nancy Drew And The Hidden Staircase is a quality little film, even better than the 2007 Nancy Drew movie, which I also enjoyed. It's entertaining, it's well-paced, and it has a great character that youngsters can view with admiration, and hopefully want to emulate sometimes. 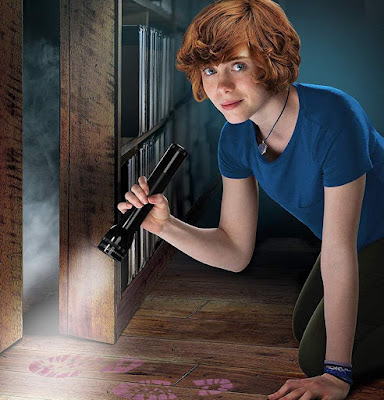