The latest film from writer-director Werner Herzog (although that is no guarantee that he hasn't already made another two by the time this review appears), Family Romance, LLC. is about familial connections and having the chance to change the narrative of your own life story. It's also about the business side of things.

Yuichi Ishii is the boss of a company that rents people to fill roles in the lives of others. This includes pretending to be the father of young Mahiro Tanimoto, and this role is one taken on by Ishii himself. The film shows how their connection grows while they take in a variety of idealistic father-daughter times together, and also shows other people seeking to rent specific figures as they process their emotions through some different situations.

Although there are interesting ideas bubbling under the surface here, this ends up being a subject that isn't best served by the loose and unfocused Herzog approach to it, although a few scenes (including a memorable ending) definitely hammer home some of the points that the director would have found so fascinating in his lifelong quest to view various aspects of humanity under his personal microscope, which so often happens to have a movie camera attached to it.

Using a variety of non-actors in his cast, Herzog manages to get suitable performances from them all, perhaps helped by the very nature of the artifice being explored. The development of the relationship between Ishii and Tanimoto is the heart of it all, and it's good that we first see them when they first meet, but this also causes reverberations through the mental state of both, as they consider the nature of their relationship, and as the adult starts to consider the wider implications.

Still working with his fast and loose approach to things like filming permits and established moviemaking practices, Herzog does what he can to make a film that is both intimate and yet also full of energy. It just doesn't feel like the right fit though, much like his lack of focus. For some reason, this story feels like it would be better if it was allowed to unfold in a more relaxed and traditional way. The runtime, about 89 minutes, feels even shorter than it is, with certain parts of the film leaping from one moment to the next without a feeling of any real connection, and without really letting them breathe. That may well be a point that Herzog is making, but it doesn't work well for the film in cinematic terms.

Family Romance, LLC. was presented as an exclusive online preview to MUBI subscribers, and I am sure it will be back. 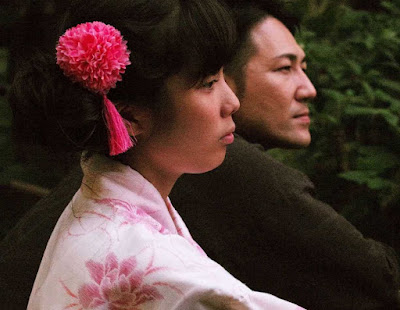