Here we are then, with the latest film in the Predator series and the latest film that everyone and their cousin seemed to prioritise as a viewing over the weekend. It is also the latest film to come along on a wave of hyperbole from people who saw it first and seemingly wanted their reaction to be the most positive one that helps promote it. Because this isn’t as good as either the first or second movie, despite what many were saying, but it’s very good, and easily takes the third spot in my personal ranking of the main Predator movies.

It’s 1719 and Naru (Amber Midthunder) is a young Comanche woman who wants to pass a trial that will allow her to be recognised as a great hunter, just like her brother (Taabe, played by Dakota Beavers). With a great skillset, but also a few major tricks to learn, Naru, and her dog (Sarii), soon finds that she is the one about to be hunted. But can she turn the tables on the predator?

There’s plenty to enjoy here, not least of which is the gorgeous visual style throughout (with a number of scenes slowing the camera to pull back and show the full beauty of certain moments). Director Dan Trachtenberg, who also worked on the story with writer Patrick Aison, does a great job of establishing a strong main character, an interesting environment, and a number of situations that feel different to what we have seen previously, yet boil down to some very similar key points.

The special effects are generally of a high standard (although some poorly-executed animals were a bit off-putting, especially when it felt unnecessary to dwell on some of them for so long), the kills are decent, and there are a good few nods to other films in the series. Just be willing to forgive the dire delivery of the iconic “if it bleeds, we can kill it” line.

What works against it? Well, a lack of originality for one thing. The time period and setting are well-used, but this once again boils down to a predator hunting humans in a jungle, which is the main premise for the majority of the films in this series. It also feels strangely neutered at times, with the gore and bloodshed often just cut away from in a way that feels a bit clumsy, and gives me the impression that there is a stronger cut out there somewhere. And then we have Chekhov’s assortment of plot accessories, all just a bit too obvious, which leaves viewers one or two steps ahead of the main character for most of the runtime. Most movies do this, it’s not the biggest cinematic sin, but two main features here had me rolling my eyes and counting the minutes until they made a significant reappearance. And I am yet to receive a satisfactory answer to why the Predator would stumble across a group of armed men who could have very easily been perceived as a threat . . . but he chooses to just leave that encounter without them even knowing he was there. Answers on a postcard please, and you cannot just say “plotting”.

Bonus points for the cast though, with the Native American people (I BELIEVE the majority of the cast were Comanche) represented in a way that showcases their community and strength. Beavers may not be the best secondary player, but this movie belongs to Midthunder anyway, and she holds your attention for every minute that she’s onscreen. There are other people doing decent work, including Dane DiLiegro as the Predator, but the other star of the show in the dog. If this film featured only Midthunder, the Predator, and that talented doggo then I probably would have enjoyed it just as much. In fact, it might have been a better film, because there are a bunch of French Trappers introduced into the plot in a way that feels like an obvious route to increasing the bodycount.

I have only gone out of my way to list some of the negatives here to show some balance. The fact is that none of these things were bad enough to ruin the film for me. They were there though, small things to nitpick over once I started to mull over what I had just watched. Overall, however, what I had just watched was a superior entry in a movie series that hasn’t ever really let me down. Some are a bit worse than others, I think we can all agree that The Predator was a weak entry (although a rewatch might be in order), but this easily belongs alongside the better instalments.

P.S. be sure to watch all of the end credits, which are a nice treat.

P. P. S. The “Comanche cut” is available on Disney+ if you press the button that takes you to Extras before pressing play on the movie.

P. P. P. S. I may as well link to my review of Predators here (ignore any spelling or grammar errors I can no longer edit). 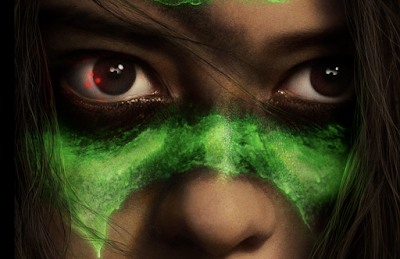