I like a good haunted house movie. I also like the films of Alexandre Bustillo and Julien Maury, who wrote and directed this. And underwater terror can often easily entertain me. That’s why I retained a healthy sense of optimism when I decided to finally check out The Deep House, despite the many negative reviews that it has garnered since more and more genre fans were able to check it out.

The heart of the story is very simple. Camille Rowe and  James Jagger are a couple who have decided to holiday in France and treat themselves to a unique diving experience, exploring a house that sits at the bottom of a lake. Unfortunately, the house isn’t as still and empty as expected, which makes the creepy underwater exploration even creepier.

I was on board with The Deep House a long time ago. As soon as I heard the wonderfully simple main selling point, I knew it was something I would be interested in. There are scenes that work. It’s just a shame that they become outnumbered by all of the scenes that don’t.

Bustillo and Maury certainly like to make their horror as beautiful as it is scary and/or disturbing, which is why I have, and will, always been interested in whatever they do, even if it feels like a huge step down for them (a la Leatherface). This feels like it should have been an easy “win” for them, a return to form after some stumbles. Sadly, the underwater environment proves to be a bit too constrictive when it comes to setting up, and delivering, the scares.

Everything is set up well enough in the opening 10-15 minutes. Viewers are told about the plan, and characters discuss how much time they have in relation to how much oxygen they will be carrying. Simple. You then get some shots of the divers finding the titular building, and those are as gorgeous as they are unique. Moving in to the house itself, standard living environments are rendered spooky and unnatural by their underwater setting, and I started to think that everyone who disliked this movie was wrong. I would love it, and I would try to convince others of just how good it was.

That didn’t last long though. A few nice details aside, the rest of the film becomes a collage of murky shots, tension ruined by the frame being filled with too many bubbles as people are panicked, and a very poor sense of the geography of the area being explored. There are still a few decent moments here and there, but most viewers will wish the film-makers could somehow find a clearer way to present their concept (which is paradoxically the main strength and weakness of the film).

Rowe and Jagger do just fine, but their characters feel as if anyone could have taken on the roles. Most of us look very similar when wearing a full set of scuba-diving equipment, and the dialogue is delivered more with a focus on relaying information than conveying any deep character development (no pun intended). The main character, the one making the biggest impression, is the house, which proves to be a winner when showcased properly. It’s just a shame that so few scenes really showcase it properly.

Not an unwatchable disaster, the strength of that core idea and the occasional visually stunning moments guarantee that, The Deep House is just sadly disappointing, and isn’t helped at all by an underwhelming and unsatisfying finale. I still have plenty of goodwill left for both Bustillo and Maury, but it isn’t as much as it once was. 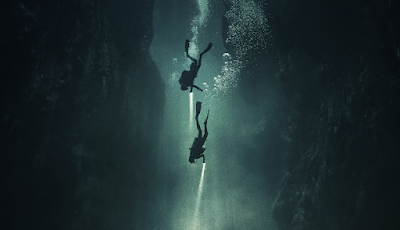