People always like to go on about their respect for those who have served time with the military. There’s always an element of peer pressure to view everyone in uniform as a hero. But the same peer pressure is rarely applied to ensuring things like decent benefits for veterans, free healthcare, and help with mental health issues (particularly PTSD), readjustment to civilian life, and even housing. Sometimes it feels very much like people are saying “thank you for your service, please let me swerve around your cardboard bed while I vote for someone who has you bottom on their list of self-enriching priorities.” Or maybe I am being a bit too bitter and cynical.

Anyway, Dog is a film that explores PTSD and rehabilitation, but it does so by pairing Channing Tatum up with a dog, Lulu, perhaps because those making the film knew that this would sugar-coat the message better than just having a damaged human character as the focus. Tatum plays Jackson Briggs, an ex-Ranger who really wants to get back into military service. He has somehow managed to convince someone that he is medically fit, despite having some major problems, but a superior officer needs to make a call to finalise everything. That call will be made, but on one condition. Briggs needs to take Lulu on a cross-country trip to attend the funeral of the young man who used to be her handler. That would be easy enough, if not for the fact that Lulu is as traumatised and nervous as many other soldiers who have been in the heat of battle as often as she was.

Co-directed by Reid Carolin and Tatum, both making their feature debuts in that role, Dog is a very easygoing, very pleasing, mix of drama and comedy that aims more for the former than the latter. Even the potentially funniest sequence (in which Tatum pulls off a scam to get a nice hotel room for one night) ends with a moment that brings everything back down to a sombre reality. It’s not depressing though, although it is emotionally manipulative and moving (I had something in my eye on a couple of occasions), and anyone thinking they know how it will all play out is probably going to be 100% correct with their predictions.

The script, by Carolin (from a story developed with Brett Rodriguez), is best when it maintains focus on that strong through line of the central character developments. There are a number of episodic side-steps, played out with varying degrees of success, and one or two moments could have easily been excised to craft a tighter, arguably better, film. Not that it overstays its welcome, thanks to the third act being better than all the rest, but the first half of the film suffers as it shows Tatum trying to enjoy some time away from his new traveling companion.

I will say that Tatum is good in his role, very believable as the damaged and desperate veteran wanting to get back to the only life he really knows, and there are enjoyable small turns from Kevin Nash, Jane Adams, Bill Burr, and Ethan Suplee, but the real star of the show is Lulu (played by a number of different canine stars, named Zaza, Britta, and Lana 5). If you are watching a movie named Dog then you should feel something for the dog. Although starting off perceived as a vicious and uncontrollable “monster”, Lulu is always just the same as Tarik’s character, a soldier deemed unfit for service who hasn’t known any other way of life. The parallels running between the two, and how they end up complementing one another, are as obvious as they are emotionally affecting.

There are things that could be improved, including that pacing in the first half. Thomas Newman’s score isn’t great, the music choices are bland, and it’s not a visually interesting piece of work. But the central pairing of Tatum and the dog, the battle between them, is easily good enough to recommend this to fans of either kind of movie star, be it hunk or hound. 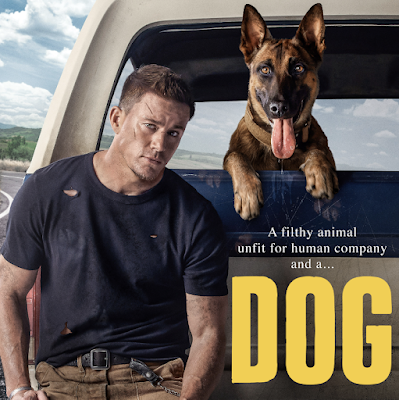