A film is always in a bit of trouble if you end up thinking of other films you want to rewatch as soon as the end credits roll. Films that you think are better, or films that are just more comforting after you have endured something quite disappointing. I stayed focused on Beast for the full runtime, but a little voice in my head kept whispering “it’s been many years since you saw The Ghost & The Darkness”. So I think you can guess that I didn’t love this.

Idris Elba plays Dr. Nate Samuels, a man who has decided to take his two daughters on a trip to South Africa. The family will be shown around some of the local area by a good friend/expert guide named Martin (Sharlto Copley). Everything quickly takes a turn for the worse when the family end up being stalked by a rogue lion with a vendetta against humans. Having separated from a pride wiped out by poachers, this animal isn’t hunting for food. It’s out for revenge.

Writer Ryan Engle, fleshing out a story idea by Jaime Primak Sullivan, really drops the ball here, but is allowed to do so by a director, Baltasar Kormákur, who should know that more needs presented onscreen to cover up the weaknesses in the script. Most of us haven’t encountered a lion, for example, but I am sure we can all imagine how easily limbs would be torn and lost if we met one that was in a bad mood.

The CGI stays consistently good though, which is a big plus, and many scenes in the first half of the film work really well in a simplistic “it’s Jaws, but with a lion” way, so there’s enough to enjoy while the cracks start to appear. I also really enjoyed the score by Steven Price (I am listening to it right now while writing this review), a selection of music that evokes the right sense of geography and tension throughout without filing the soundtrack with every obvious and easiest choice. Although it is something I sometimes forget to mention, or speak of in the abstract rather than the specific, major kudos must go to those crafting the cinematography, especially for making the night scenes so dark and thrilling while also still keeping everything clear and visible enough.

The cast do what they can to help make this as watchable as possible. Elba has been a bona fire star for a good few years now, and if anyone can face off against an angry lion then I believe he can. Iyana Halley and Leah Jeffries are good as his daughters, respectively, Meredith and Norah, with the latter being the older sister who tries to be more pro-active in some of the dangerous encounters. And Copley is as good as ever, despite the fact that he is saddled with delivering a lot of the exposition and then being voted “most likely to die” in any scene that features all four of the main characters together. Despite some other supporting turns, the film generally stays focused on the quartet vs the lion (which is the strongest aspect of the script).

Although not a terrible film, Beast ends up folding under the weight of one implausibility atop another, which leads to an ending that is hard to care for. In fact, it’s sadly laughable. If you think big cats don’t have decent eyesight, don’t have great hearing, and wouldn’t sniff out potential prey hiding just beside them then maybe you will enjoy this more than I did. You will also have to accept that people can be mauled by a lion, while punching back at it, and somehow not watch their arms and legs being moved meters away from their body.

If you don’t like Elba or Copley then this will have even less appeal. If you do like them though, well, this isn’t the worst way you could spend 90 minutes. It just ends up being dragged down to something average when the bad outweighs the good. 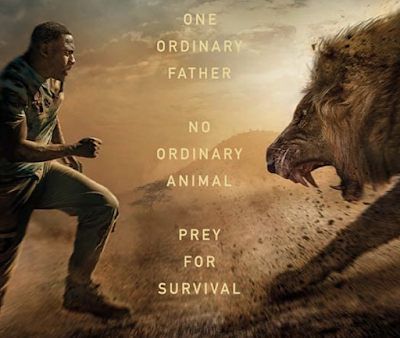