The first feature directed by A. B. Stone and the last film written by Berkeley Anderson, to date, Lake Placid Vs Anaconda is a film as stupid and lazy as the title would suggest.

Robert Englund returns to the role of Jim Bickerman, minus a couple of body parts after his close encounters in the last movie. This time he is helping to bag a croc for people that want to use them in a major experiment that also involves some very big anaconda (hence the title). It isn’t long until things go wrong, which then leads to people being threatened by the crocodiles, the big snakes, and sometimes both together. Rolling her eyes as the body parts start to pile up, Yancy Butler is also back, her character, Reba, now the local Sheriff. She ends up working alongside Tull (played by Corin Nemec) as they try to get to the animals before a group of teens get munched.

There are other things I could mention here, the ruthless scientist and her lackey being one of them, but all you really need to know is that this is another instalment in a movie series that should have really stopped after the first film. Varying levels of acting talent and poor CGI are the order of the day, although it has to be said that Anderson actually creates some decent humour when focusing on one or two “mean girls” who end up in the wrong place at the wrong time.

Englund is fun in his role, once again keeping an eye on whatever will get him a great payday, and Butler is just the same as she has been in all of her Lake Placid appearances so far. It’s not a nuanced performance, but I guess it works, especially if you like Butler. Nemec is appropriately bland and willing to play second fiddle, Oliver Walker is moderately amusing as an inexperienced Deputy, and Skye Lourie is okay as Bethany, the young woman who is supposed to be worth rooting for ahead of many other characters.

Stone does what is required of them, helped at times by the script while hindered by the obviously tiny FX budget, but it is bizarre to see just how much of a wasted opportunity this is. Neither the crocs nor the snakes feel like the star of a movie that is clearly intended that way, and the pacing, music cues, and lack of gore mean that viewers never forget this is very much a TV movie.

Nobody would willingly choose to seek this out or watch it, it’s a film you catch accidentally while flicking between channels, and nobody would own it in digital form. Except me. I own it, and I just willingly watched it. And I believe I have one more dip left to watch in this series. So I will be getting to that soon enough. 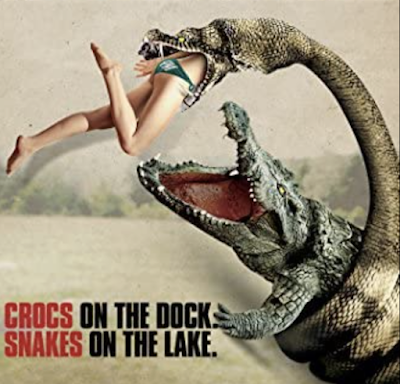