Pete Davidson plays David, a young man about to hold a hurricane party for a group of his friends at his family home. He also seems to be a bit of a dick, but that becomes less of an obstacle for anyone watching the movie when David is found dead. The group immediately suspect the one other male still amongst them (Greg, played by Lee Pace), but they also turn against one another as the killer seemingly stays hiding in plain sight. Is it Sophie (Amanda Stenblerg), a recovering addict who has turned up with a new girlfriend, Bee (Maria Bakalova)? Is it Bee? Maybe David’s girlfriend, an actress named Emma (Chase Sui Wonders), was just tired of his shit. Podcaster Alice (Rachel Sennott) seems to be desperate enough to create such a drama. And then there’s Jordan (Myha’la Herrold), a badass who definitely seems the most capable of killing someone.

Written by Sarah DeLappe, majorly reworking a more straightforward slasher movie screenplay by Kristen Roupenian, Bodies Bodies Bodies is a comedy that is looking to have people love or hate it. There will be very few people who end up in the middle, thanks to the relentless parade of negative character traits displayed by everyone onscreen. Nobody here seems to have many (any?) redeeming features. Which doesn’t mean they deserve to die, but it is certainly more fun to watch this group self-implode due to the consequences of their own attitudes and actions. The dialogue isn’t as sharp as it could be, but you get some superb lines that will make you laugh while reminding you of how awful the characters are, and it’s a shame that things seem to take a bit too long to really get going. Thankfully, the third act is so good that it’s easy to forgive the rest. And there’s an ending that ranks up there with one of the best I have seen in the past few years.

Director Halina Reijn does a good job with the material, and she has a team that works well in shooting most of the movie in darkness. The house is big enough for people to wander off to various parts of it while hunting for a killer, there are plenty of accessories that you would expect these characters to have to hand, and there’s a general level of consistency and care taken with the developing tensions and the placing of potential victims within the geography of the house.

Having Davidson as the first murder victim is great casting. He can quickly make a strong impression, good or bad, and his presence/character casts an appropriately large shadow over everything. Although very much an ensemble piece, and everyone does well with the material, Amandla Stenberg is an excellent nominal lead, sharing most of her scenes with a very good, and suitably bemused by the people around her, Bakalova. Sennott is a lot of fun, and Herrold revels in the strength of her character throughout. Pace is good, but gets less screentime than most of the women, and the only one who barely makes any impression, seemingly due to being almost forgotten by the script, is Wonders.

I liked Bodies Bodies Bodies, but I was apprehensive during some of the earliest scenes. I didn’t like the characters, didn’t know who to root for, and struggled to even enjoy the “whodunnit?” aspect. Then I realised that was the point of the movie. As the situation starts to get worse, it is easier to see the characters all being hampered by their narcissism and selfishness, which makes it easier to just sit back and enjoy. And you have that ending, which is good enough to lift the whole movie up a notch. 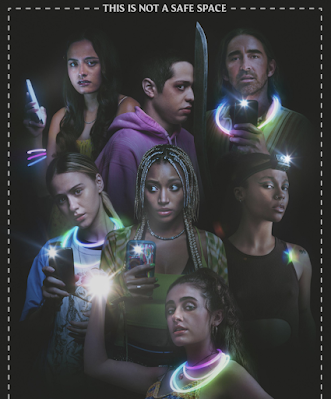