There’s a fairly amusing, and fairly accurate, joke you can see shared online sometimes that provides British phrases with translations of what they really mean. Saying “you just come round some time” is actually not an invite. It is said out of politeness, and underscored with a real sense of dread that the person you are speaking to ever takes you up on the offer.

Speak No Evil is, in a way, the ultimate illustration of that point. Stemming from politeness, two couples become friends while on holiday together. Bjørn (Morten Burian) and Louise (Sidsel Siem Koch) are parents to young Agnes (Liva Forsberg). Patrick (Fedja van Huêt) and Karin (Karina Smulders) have a son named Abel (Marius Damslev). The group get on so well together that Patrick and Karin invite Bjørn and Louise, and Agnes, to visit them at their home. But it's not long until things start to get tense, due to a lack of consideration from the hosts, and a number of strange incidents that out the guests on edge.

Well-acted and presented throughout, this is a really effective thriller/horror movie that works best when characters start having moments of doubt and confusion about people they then remember are complete strangers to them. There are numerous small moments in the first half of the film that begin to sow seeds of doubt, but there are also some major details signposted that ultimately make the third act slightly predictable, and inevitably anti-climactic.

Director Christian Tafdrup, who co-wrote the screenplay with his regular collaborator, and brother, Mads Tafdrup, is interested in holding viewers in a state of squirming discomfort. The first half of the movie is especially hard to watch, presenting a number of incidents that might be a bit more open to interpretation, but the second half is interesting in a way that runs surprisingly close to something like Funny Games, with the script working almost more as a mirror than a straightforward narrative piece. Viewers will question how much they themselves would have tolerated if they had been in the position of the troubled house guests, and the lack of an obvious answer makes the film all the more troubling than something that could have been a bit more straightforward. It’s just a shame that we get those final scenes, moments that undermine the film in a few different ways, but the collapse of plausibility and logic isn’t enough to ruin the whole thing entirely.

The cast all do very good work, although it must be said that Van Huêt struggles with some of the scenes that remove ambiguity from his character, and they all work well with the flowing and shifting dynamics of the scenario, whether friendly to one another, mistrusting, or openly hostile. Burian is the standout, but Koch excels in the way she portrays a woman who senses something a bit awry while her husband isn’t as bothered by it. It could have been all too easy to paint her as the hysterical woman disbelieved by everyone around her, someone we have seen onscreen a thousand times before, but both the script and her performance perfectly avoid that particular pitfall.

It is a shame that the ending brought things crashing down so suddenly for me, but I will say that I haven’t heard that being an issue for anyone else. Maybe I was being a bit too critical, which is unlike me, or maybe others were much more forgiving after being taken on such an intense, wild, ride. 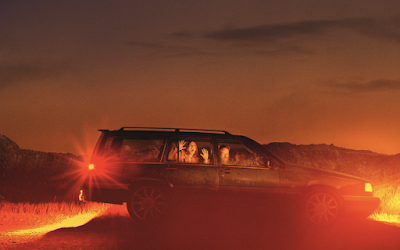